It's all over for another year, but Sexpo 2011 has been a blast.

But the biggest highlight for me came about through the power of twitter. As the bloke behind the @SexpoPerth twitter account, I spent quite a bit of time interacting with the stars of the show online, so thought I'd do my last tweeting live from the show.

I got a snap of adult film star Katsuni (@Katsuni)in action posing for pics with the punters and tweeted that I'd like to go say hi, but she was obviously too busy. And I didn't want to look like the creepy fanboi Sexpo single guy. There were enough of those already.

Anyway, a couple of minutes later a guy taps me on the shoulder and asks, 'Are you the Sexpo twitter guy?' I give a slightly hesitant, 'um, yeah...' and he tells me Katsuni wants to say hello.

So I go and sit on the couch with Katsuni, we have a nice chat and I get a photo of us on my iPhone and another glossy 10x8 which is now on the office pin-up board... how nice is that? A lovely lady and a French accent to die for.

Twenty years ago I would have taken the whole shebang down the Gonzo path aka HS Thompson, right from the get-go.

Back then I would have been liquored-up to the eyeballs, thrown Miss Katsuni over my shoulder and stumbled outside to my waiting topless Cadillac Eldorado, waving people away with a giant vibrating black dong.

I would have thrown her in the back, popped the trunk to snatch a handfull of blotter acid and a quart of ether, then pointed the Caddy down Great Eastern Hwy on a course for the Great Sandy Desert... pausing only briefly to swat the bats from my face (with the dong) and pick up my crazed Samoan lawyer.

But of course that was 20 years ago. This time around I smiled for the camera like a creepy fanboi, wished Katsuni a safe flight, got a peck on the cheek and set off home for the Western Suburbs in my Mazda 121 hoping to beat the rain. Gonzo man, pure Gonzo... 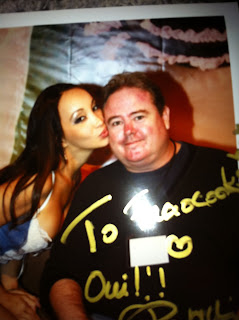 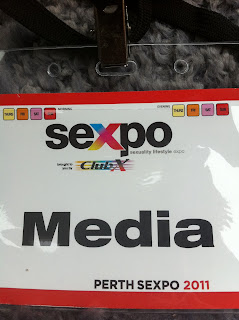 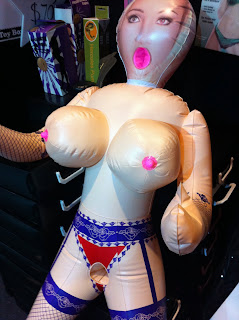 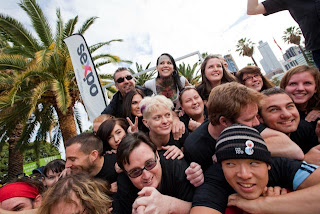 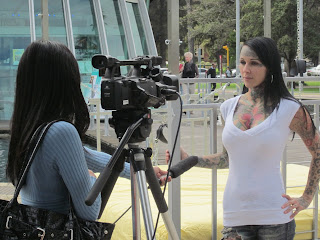 Hahaha I bet you were even more mild-mannered 20 years ago.

Ask him the story about the infamous Vic Park party he hosted at uni...

Just what has the naughty little French thing written on the photo that ends in 'cock' and which is nicely obscured by the camera's flash? I also vouch for, and witnessed, the lad's upstanding party history before he became such an upstanding member of the Perth community.

I would love to see more photos of the bodypainted girls, especially the sexy red head! ;)

You got a very interesting and inspiring story here. Thanks for giving me and the other readers insights on life's works and achievements.

Post was a bit different, thanks for sharing the information.

It can't work in reality, that's exactly what I think.

Just what has the naughty little French thing written on the photo that ends in 'cock' and which is nicely obscured by the camera's flash? I also vouch for, and witnessed, the lad's upstanding party history before he became such an upstanding member of the Perth community.small business web disign