You wouldn't be dead for quids 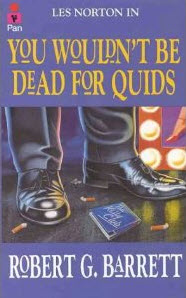 It had been a quiet night at the Kelly Club by any standards. Big Billy had put a couple of boof-head wannabes on their arses early in the night and Les had to backhand a young buck who thought it'd be a good idea to "take the bow-tie off the bouncer."

Bad mistake. "There's one less tooth that'll be coming along on your wedding day," he muttered as the young bloke's mates dragged him away.

By the time they closed the doors just shy of 2am, Les was already yawning and well and truly ready to hit the fart sack when Eddie came down the stairs.

"Fuck off Salita, if I'd let you handle him the poor prick'd have another hole in his stupid head and be buried in the foundations of that new high rise in Balmain," he shot back with a grin.

"Yeah, whatever mate. I let you handle all the tough ones," Eddie said, returning the smile.

For a deadly assasin, Eddie was one of the nicest and most genuine blokes Les had ever known. He'd crawl through broken glass for a mate, but could kill a man in a crowded elevator without anyone noticing a thing.

"Anyway, Price wants to see us in his office," Eddie said. "Fat George was looking as pale as an albino Norwegian with a bad case of anemia when I saw him half an hour ago, so it can't be good news."

Fuck, that's all Les needed. Odds on that in half an hour he'd be tearing down the freeway with a dead body in the back of the Berlina, or fumbling around in the dark trying to blow up another Bondi landmark.

He followed Eddie up the stairs and through the thick wooden doors of the casino boss's office. Inside Price was propped behind his desk and George was slumped in an antique chair nursing a large scotch on his gut. Billy was already inside and walked over to Les with a cold XXXX.

"You could use this mate, all those skinny kids you had to bash up tonight. Must take it out of you?"

"Christ, not you too! A poor bloke could develop a complex. What will I tell my therapist?"

Ordinarily Price and George would've chipped in to score some cheap points on the big red-headed Queenslander, but not tonight. Something was wrong and Les noticed that George was red eyed from crying.

"Les, we've got some terrible news mate. I think you should sit down for this one," Price said, gesturing towards a chair in front of his desk.

The hairs on Les' neck were standing up and he had a sinking feeling in his gut as he pulled up the chair and lowered his big frame down into the red velvet cushions.

"Les, there's no easy way to say it. We found out this afternoon that Bob finally lost his battle with Jack Dancer. I'm sorry mate, he died peacefully at home in Terrigal this morning," Price said looking down into the glass of brandy he was swirling in his hand.

The blood drained from Les' considerable head and the cold XXXX bottle almost slipped from between his numb fingers.

"Fuck. But how? He was dead set convinced he'd found a cure. Last time I saw him he winked at me and said, see you in the next book mate, it'll be a real ball tearer. It's about time we sent you to Broome."

"Mate, I saw him two days ago and the last thing he said to me when I asked how he was getting along was, wouldn't be dead for quids," Eddie added.

At that moment all eyes in the room locked together in a moment of awful mutual understanding. They had been together since the mid-80s, across 27 books and countless brawls, booze-ups, road trips, murders, bombings and bashings. They'd thrown the odd "good sort" up in the air, travelled the world, enjoyed many a "delicious", smoked the best Bob Hope and even sent their enemies to the sharks.

Could it be possible that it was all over?

Les rose like a dead-weight from his seat, drained the last of his XXXX, belched quietly into the back of his hand and moved towards the door.

"I have to go home. I don't suppose anyone's told Woz yet?"

"No mate, we thought it might be best if he heard it from you. Billy saw him get home from that film shoot up the North Coast on his way in, so I think he's in for the night," said Price emptying his glass.

"It's a shit situation mate. Bob was a diamond and the bastard could write a yarn that reached out to everyone. I'll organise a drink and we'll say our farewells in true Robert G Barrett style, but for now I think we all need to go home and get some sleep."

Les just nodded, ran his hand through his curly red hair and started for the door. There were pats on the back all round and Billy muttered something about the surf club in the morning, but Les was spent - he felt like a pen that'd run out of ink, a blank page.

He climbed wearily behind the wheel of the Berlina and turned into the bright lights of Darlinghurst Road. Cold Chisel's Flame Trees was the soundtrack as he headed home to Chez Norton, a single tear rolling down his craggy cheek.

Ever thought of writing books, John?

You could be Bob's heir apparent.

Hard to believe he is gone but you just have to read one of his life story and the memories of Bob aka Les never dies. Miss you mate ��

Ghost in the guitar said...