Chaos and bloodshed on Perth streets!

Rampaging Bell Towers, decapitated politicians and chaos across the city... another typical Perth day really.
Posted by Cookster at 9:05 am 1 comment:

I will not eat another bowl of spaghetti bolognase in... well, at least WEEKS. Nor shall I go cheek to jowel with a pizza (unless it's an Aussie), because WE WUZ ROBBED out of World Cup glory by a jumped up little upstart that had no place on the football field - the umpire.

I'd just put another pot of sauerkraut on the boil and was about to tap a fresh keg of Heinekin to ready myself for a penalty shoot out when the unthinkable happened... the Mexican house maid, Concheeta, unplugged the plasma to run the vacuum over the rubble of my hotel room.

By the time I'd placed a well struck volley to the side of her head and wrestled the cord back into the socket it was all over... the cheating swines we like to call 'white maggots' in AFL had given the Italian 'diving' team a free shot at goal with only 30 seconds left on the clock. It was a cruel blow made worse by a further blow to the rear of my skull as Concheeta bought the vacuum pipe down with a vengance.

As I thrashed about the room trying to shake her from my back and bemoaning the bastardisation of the world umpiring fraternity, I reflected on what a fickle game the world sport is. Quite frankly you I-tie nancy boys, if we'd had Harry Kewell on the track yesterday, you'd all be back home with your Mamas right now coping a damn good thrashing from the frenzied Italian press corp.

Yes, if it wasn't for Harry's gout-ridden crotch and corrupt officialdom, we'd be looking set to ride rough shod over the happless Ukranians and marching on to World Cup glory.

I've decided to stay on in the hotel and cut my losses over a week of Wimbledon action - when did Italy ever produce a world class tennis player? Probably never as you're all too busy falling over and grabbing your hairy white shins.

As I tuck into my strawberries and cream I'll be keeping an eye on you Italians and the umpires - hope you all get gout in the gonads!
Posted by Cookster at 12:29 am 3 comments:

Bring on Italy - where's the sauerkraut?

Sweet Jeezus, it's been a hell of a roller coaster ride this World Cup campaign... been too tired to fire up the lap top since Japan and the Mexican house maid has now taken to stealing my USB connection - found it last time in the sauerkraut vat.

Don't know if it's the lack of sleep, but I'm now hatching rabid conspiracy theories about the umpires officiating at this gig. Last night the night porter looked suspiciously like that 'Merc' character and I swear he did something to the schnitzel... he must have a twin brother here in Perth, no two heads can be that ugly.

The Brazil match jigged my senses a bit and laid me low for a few days. I tried focussing on the other group matches but I felt doomed that somehow I would never see another goal scored at this Cup... nil all draws are the curse of the round ball game and have the ability to seriously screw with your synapses.

And what about last night? An unholy 3.00am Perth start as the outside temperature dipped to a testicle shrinking 3 degrees and the sun decided to hit the snooze button for another few hours. Staring from the top floor window I felt like the only dumb soul in Perth to be cranking up the blood sausage and tapping the Heinekin keg for another go around at this mad caper.

Come 5.30am - and a very heated argument with the concierge about the smell of boiling cabbage coming from my room - I had crossed over into a wild insanity that had me singing 'Harry Kewell, Harry Kewell' to the tune of Daddy Cool. Just when we thought all was lost by Gooooos's decision to put 'lurch' in goal, the great man came of age and gave the cheating, gang-tackling Croats a swift kick in the nads to go on with. "You're red, you're white, you're going home tonight!"

Speaking of the Croats, what was with that swine who got three yellow cards and still slunk around like a curr, refusing to leave the field?

Still, we're on to the big stuff now... It-al-ia, primadonnas of the Euro circuit and quicker to take a dive than a Jap on a Minke whale fritter. Christ, will that Mexican woman ever leave me alone? "No, I did not steal all the shower caps from your trolley, so kindly give me back my USB cord and bugger off back to the laundry!"
Posted by Cookster at 6:59 pm No comments: 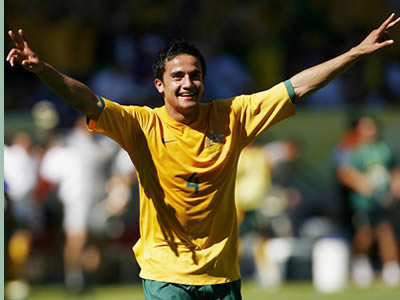 Oh how sweet it was last night when in the space of just six minutes, 70 odd minutes of frustration was swept away by Australia's first three goals ever in the World Cup.

Commiserations to the Japanese contingent, but quite frankly, you should never have even been in the picture - watching Schwartzer get taken out of the play was akin to Gulliver being pinned to the ground by the little people. It was a definite foul and the Egyptian umpire has admitted it was a good job we had the 'gods' on our side...

Can't say I'm impressed by the rotten nancy-boy tactics deployed by the Japanese either - they must have the most delicate ankles in the world... must be the strain of carrying all that 'Flock of Seagulls' hair around all day.

Anyway, I've been holed up in a penthouse suite overlooking the Swan River now since Sunday night and lack of sleep is starting to take its toll. I've taped up all the windows to keep the light out, but there's a feisty little Mexican house maid who keeps sneaking in and trying to peel it off when I go to the bathroom.

To recreate the atmosphere in here I've got three mini-kegs of Heinekin, two gross of blood sausage, a great vat of pickled cabbage on the boil and a 'Sprechst Du Deutch?' language tape running in a loop over the sound system. I've built a little grandstand over the couches populated by a half dozen blow up kangaroos and two of the porters drop by every now and again for a burst of 'Aussie, Aussie, Aussie, Oy, Oy, Oy!'.

Looking forward to the Toga match, but need some sleep before I start talking to the roos. Can hear that damn Mexican woman scratching around outside the door again - might have to take her down with a trademark Viduka foot sweep...
Posted by Cookster at 12:05 am 2 comments: 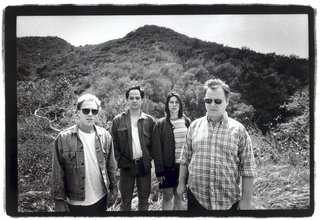 There's been much talk of late about the top 10 albums in the UK and for the main part, I agree on what the punters have got to say.

So, I thought I'd compile my own little list - in no particular order except for the number one spot, which The Pixies will FOREVER hold down.

I've missed a lot, I know and I'm going to kick myself later when I look through my collection... but let's just call it a work in progress - a 'fluid' top 10 if you like.

Strong contenders:
1. Psycho Candy - The Jesus and Mary Chain
2. Why Should I Stand Up - the Colorblind James Experience
3. Echo and The Bunneymen - Crocodiles
4. Liberty Belle and the Black Diamond Express - The Go-Betweens
5. Black the Sun - Alex Lloyd
6. Live Rust - Neil Young
7. The Queen is Dead - The Smiths
8. Angel - 20th Century Crucifixion (for you Hadyn!)
9. Pills, Thrills and Bellyaches - the Happy Mondays
10. Henry's Dream - Nick Cave
Posted by Cookster at 8:38 pm 17 comments: