A number of people have asked me why I haven't posted anything about the Jeff Farmer incident from last weekend where he is alleged to have punched a nightclub bouncer in the face. There have been suggestions that I may have turned the other cheek on this one due to my passion for the Fremantle Football Club.

Well, to set the record straight, my lack of correspondence is simply due to the fact that I have bigger fish to fry right now. Indeed, my third child is due to arrive into this world on Wednesday and preparing for his early arrival has taken up a fair bit of time... blogging is a long way down this list right now.

But to set the record straight, I believe that the Fremantle Football Club's actions in suspending Farmer until round 13 was the correct decision. Unlike that other mob up the road, the club imposed its penalty swiftly and without excuse, ultimately to the detriment of season 2007, but for the benefit of the club's long-term morale and integrity.

While the West Coast rots from the head down in a mire of excuse ridden denials and arrogance in its 'win at all cost' approach to the game, Fremantle has shown itself to be a strong, decisive club that isn't prepared to let its players ride rough shod over the team as a whole.

Farmer was told not to go to that club and he broke the rules, regardless of what transpires in court today. Worsfold, Gooding and Nisbett could learn a lesson in discipline and people management from this episode.
Posted by Cookster at 8:34 pm 8 comments:

I've seen it all now in the West Coast shame file.

Then came a bare chested Benny Cousins running away from his abandoned vehicle, falling asleep legless in a Melbourne street, then inevitably packing his bags for an Arizona rehab clinic - paid for by the West Coast Eagles Football Club.

Not to be outdone, enter Daniel Kerr as he tried to spear a cab driver with his own car arial after snapping it off in some kind of monkey-boy hallucinogenic rage. Then two weeks later he's revealed on tape as having purchased Special K from a drug dealer with a penchant for full forward's gloves. Assault charges in 2006, two.

Don't forget Flatline Fletcher's near death experience in the US! One too many middies of VB we're led to believe...

And taking the spotlight off that nasty drug situation onto more salubrious issues, we have Adam Selwood allegedly telling Fremantle player Des Headland that his daughter - SIX YEAR OLD DAUGHTER - is a slut.

Like any good father would, Des allegedly took a swing at Selwood and threatened to kill him if he ever said it again. That alleged strike - which umpires now contest happened twice - looks set to put Des out of the game for up to six weeks.

To rub salt into what is developing into a horrible festering wound, Des also got fined $800 for wrestling Selwood. Apparently Selwood just lay there and let himself be wrestled because he hasn't been fined at all.

I hear that Fremantle will contest the charge and it would appear that Des is intent on telling the world exactly what Selwood said that made him want to cave his skull in. I say the club should back him all the way and if his charges aren't reduced significantly, or dropped altogether, further action should be taken.

Quite frankly, while I have no qualms about a good sledge, to tell a father that his six-year-old girl is engaged in frequent sexual acts is a disgrace - far worse that punching a player in the testicles, but there's another low act that Danny Kerr can tell you all about.

If what Selwood reportedly said is indeed the case, he should be disgusted with himself. But then again, it was probably a club tactic all along and he and his teammates are no doubt chuckling about the result right now nad wishing themselves a "fucking good season".
Posted by Cookster at 5:35 pm 24 comments:

I heart the Pixies

Now, where were we? The Pixies - STILL the greatest alternative rock band in the world and they proved it last Thursday at Blackjack 2007.

The last time I saw them was in 1989 and the crowd was simply going ballistic. This time around it was like gathering at a reunion - or going to church - to spend just over an hour as witness to something that is so good it's almost dangerous.

Excuse the puns, but there is no doubt that some kind of weird 'Black' Francis magic was involved in this tour - a Deal with the devil himself - reincarnating a maniacal shaven headed Francis and Santiago, an ageing magician on the skins and the bad-grandma of rock Kim Deal a smoking incindiary on the bass.

There was plenty of jumping, screaming and cackling from the crowd, but the big difference between this gig and the last one 18 years ago was that almost everyone was singing along with the lyrics - a group prayer, one last chance to dip our collective toes into the maelstrom of demonic, fret bending, screeching, eyeball gouging madness that changed the way we thought about music forever.

And despite the sheer joy of watching it all unfold, for me there was an underlying sadness - like bringing a favourite relative out from cryogenic suspension for one last party that you know is going to end all too soon and is unlikely to ever happen again.

Watching Kim Deal mouthing the lyrics, 'I.... Love... You', you just knew it was a heartfelt thank you and farewell - and the love flowed back onto that poorly lit stage in the Claremont showgrounds in abundance.
Posted by Cookster at 2:10 pm No comments:

Away with The Pixies 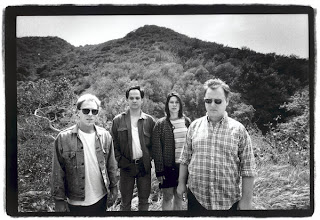 I think it's fitting that my 101st post be a topic of some significance - a milestone to remember and one that will be hard to forget for this self confessed Pixies groupie.

Yes indeedy, the greatest alternative rock 'n' roll band in world history will be traversing the Nullarbor this week to appear as the headline act at Blackjack 2007.
They'll be playing alongside Eskimo Joe, the Living End and Gnarls Barkley, which is akin to The Beatles being supported by Danni Minogue and Delta Goodrem... no, I take that back... I have a healthy dose of respeck for the support bands, particularly if Jarvis Cocker makes his rumoured appearance, but hell, the Pixies are rock 'n' roll royalty.
Quite frankly, I'd sit through a five hour Boys II Men gig if it meant getting a dose of Joey Santiago's demonic geetar magic ripping riffs through my synapses, coupled with a bit of 'I'm fucking with your mind' Frank Black falsetto for good measure.
Oh yeah Kim, you and the boys are the real Deal and I am looking forward to seeing you again for the first time since 1989 more than a Fremantle Premiership... well, possibly on a par with that Premiership.
It may seem as though I need a good slap, or a glass of water in the face, but for those of us who experienced the Pixies back in the 80s, when psychedelia aka The Stone Roses, the Happy Mondays, etc, etc, was at the cutting edge, you'll know what I mean here. The Pixies were a revolution that swept all before them in a grinding, teeth gnashing, eyeball gouging musical tsunami that changed the way some of us listened to music forever.
That night some 18 years ago when I stood pint in hand at the Studio in Bristol I witnessed something that can only be described as sheer alchemy. Even the upstairs floor that I was standing on was possessed to the point that even if you stood still you couldn't help but be bounced two feet into the air.
This time around I've got a VIP back stage pass and there is a very real chance that I'll be introduced to the band. I've rehearsed a number of lines as to what I might say at that moment - 'you guys rock', 'I've got all your albums', etc, etc, but at the end of that day I just want to tell them, 'thanks for coming and for making this 39 year old very, very happy'.
Posted by Cookster at 11:27 am 1 comment: