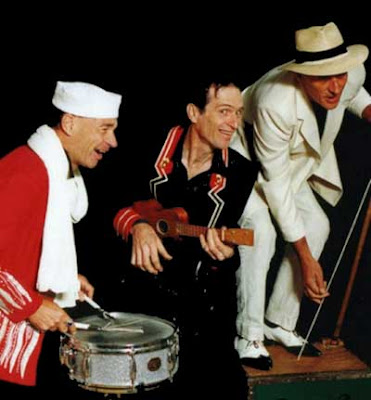 The Old Spice Boys, from Byron Bay, are teaming up with local Singer/Songwriter Brenda Chapman, for an impromptu evening this Wednesday that will take you on musical journey from the sublime to the ridiculous.

Fresh from the Fairbridge Festival, these performers have kindly agreed to do a gig at the North Fremantle Centre*. So, if you missed them when they played last weekend at the festival, come and join in this spontaneous gathering.

Wednesday April 22nd –The show starts at 8 pm but feel free to come down early and have a drink and takeaway meal or perhaps a game of lawn bowls. Doors open at 7pm. Cost: $10/5 (conc)

*UPDATE - the boys will also be playing a gig at Clancy's in Fremantle on Thursday, 23 April.

The Old Spice Boys are a comic swing trio. They play their, minimal instruments with virtuosity, charm and wit.

From Byron Bay, 800 km north of Sydney on the North Coast of New South Wales, they are big favorites at jazz, folk, blues and comedy festivals throughout Australia.

Using just a ukulele, a tea-chest (one-string) bass and a solitary snare drum the Old Spice Boys stroll fearlessly through an extraordinary repertoire of their own hilarious songs along side most unlikely interpretations of tunes by artists from Miles Davis to Ian Dury, from Prince to Bill Haley and from Bo Diddley to the Seekers.

The Old Spice Boys have been the audience favorites at a range of events including folk festivals, product launches, gallery openings, many a corner pub, family concerts, blues nights, outdoor celebrations, jazz clubs, weddings, wakes and whatever else needs a warm and witty trio of wonderful musicians dedicated to having fun and making great music at exactly the same time. Charlie Parker meets the ukulele. Website: www.oldspiceboys.com

BRENDA CHAPMAN
A gifted singer/songwriter based in Fremantle, Western Australia, Brenda writes to express the heartfelt stories from her own colourful life.

She delivers her engaging storytelling with velvety, soulful vocals and a unique Earthy guitar style. Brenda has been referred to as “The Queen of the Chorus” for her captivating melodies. She will be joined by some special guests. www.myspace.com/brendachapman

What is this, Lovers & Lobbers?

Ye gads, I was persusing the interwebs yesterday and came across a rather banal sort of post on Rotto Bloggo from a bloke calling himself Michael Hunt who runs a blog called Lovers and Lobbers.

To be honest, I thought it was the ramblings of some bogan couple without much care for spelling who liked a bit of jiggery poke in the great outdoors, in this case the lovely Rottnest Island. And then I checked the site stats and saw that the blog was attracting over 4,000 hits a day.

It holds a curious fascintation and I for one would like to see more of the 'on the road stories' as featured on Rotto Bloggo. One to keep an eye on.

*Update - after various discussions, both in the office and via The Worst of Perth, I'm starting to reach the conclusion that Lovers and Lobbers is really just an extension of facebook, where instead of posting images ourselves, we're now allowing others to do it for us... the more compromising, the better... the y-gen brigade is hungry for fame and MySpace and facebook just aren't doing it for them anymore.

Seriously, when a bunch of 20-somethings are out on the town, check out how much time they spend taking digital snaps of themselves, invariably doing the same thing, just with different combinations of people.

Would I have done the same in my 20s if capturing the moment meant pushing a button on my mobile phone? Not that we had mobiles of course... For us to take photos at the same time as we endeavoured to get smashed required some pretty good organisation - you had to buy film for a start. It was an exercise usually carried out by the arty-farty amateur photographer among us... you know, the one with the woolly sideburns and the black horn rimmed glasses.

Carrying a camera around was only a viable option if it gave you some cred - a techy appendage of sorts, before techy stuff was around.

So am I pissing up the wrong tree here in regards to Lovers and Lobbers? Do today's 'yoof' hunger for a level of fame that carries with it the inherent risk that Mrs Brown from English will see them engaged in oral fornication under a grand piano while out of their skulls on MDMA?

Email ThisBlogThis!Share to TwitterShare to FacebookShare to Pinterest
Labels: lovers and lobbers perth, michael hunt, Rottobloggo, The Worst of Perth

Where the NO votes live

Thanks to my esteemed colleague from the Rotto Bloggo desk David 'The Outrage' Cohen for drawing my attention to Antony Green's election blog analysis of who voted yes and no in the last daylight saving referendum.

No surprise to see it was the farmers who stitched us up last time, while the good folk of Rottnest Island were leading the charge for the extra hour of sunshine at the end of the day - the part of the day when it's actually of use.

I'm yet to hear anyone argue the case to end daylight saving? Cat got your tongue?
Posted by Cookster at 9:40 am No comments: 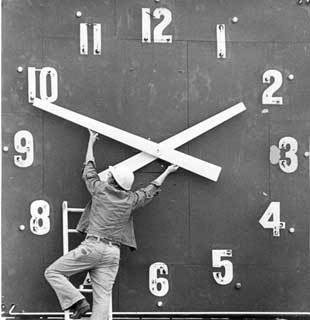 Somebody's squeezed a few vials of Viagra into the tea urn down at Daylight Savings Zombie Central. Yes siree, there's a whiff of victory in the air and the cardigan brigade couldn't be more excited if Eoin Cameron was back on the electoral hustings.

It's been slim pickings this past week in the zombie hunt pack. Frank's done his best, but with Carps on the sidelines turning to fat and The Lazy Aussie running decoy for Barnett, he's pushing shit uphill with the proverbial toothpick.

Bento is hell bent on cutting the fiends down to size with his Ruger semi-auto with the hollow tip slugs Skink smuggled in from Taiwan, but the Bus Driver and his crazy partner Tea are providing safe passage in a steel plated ex-Transperth bus. Couldn't penetrate that sucker with a Zeliska 600 Nitro Express Revolver.

It's great to have new blood in Shazza come on-board to take on the hand-to-liver spot dotted hand-combat, but for every new body we gain, another falls by the wayside. The Outrage Cohen has been next to useless since he started mainlining that aqua-farmed squid from Chinese-Taipei. It was only a matter of time before the zombies commandeered the presses at The Post to turn out their JUST SAY NO propaganda, but at least the Stones Green Ginger-based Molotov that Poor Lisa lobbed through the window put a spanner in the works.

The regionals are where we're really copping it in the neck and although Rolly is making all the right noises, my fears are that he's working as a double agent. Word is he has plans to put Matt Birney under the wheels of his tractor and seed him with a GM-free canola crop.

The referendum is drawing ever closer. The excited chatter of false teeth and the snap of elasticated double-waisted pants is a drill boring through my skull, making passage for the savage rays that will surely exact their revenge when summer 09/10 rolls around.

As I wander the early morning beaches, taking out the kneecaps of those rendered incontinent at the giddy joy of banishing daylight saving to the dark bottom drawer where Sunday trading resides, my thoughts start to wander.

Lonely summer afternoons on the beach watching a feeble, febrile sun slink away into the Indian Ocean at 6.30pm. Riding back from Little Parakeet Bay on Rottnest Island asking no one in particular, 'Hey, who turned out the lights?'. Poking the snags on the backyard barbie in the half gloom wondering if they're going black, or if it's just the fading light. Sending down a beam ball to the number one son in the Floreat nets and realising too late that he can't see jack shit and is about to wear an incrediball on the chin.

But I guess that's okay, cause the zombies will march forth in the early morn like some remake of Wacko Jacko's Thiller video, boldly striding along to the beat of their own selfish drums as the rest of us consider block-out curtains to keep the baby from waking up at 4.30am.

They'll gather in excited clusters at suburban Chinese restaurants in the 6pm gloom, proferring wine coolers and competing with each other as to who goes to bed and gets out of bed the earliest. 'Water the lawn at 4am, tea on the table at 4.30pm and in bed with Graham Maybury by 6.30pm - that's the life Frank!"

I gather I'm not alone in the YES army, but I feel that our numbers are thin and the zombies are on the rise. Indeed, I think there will be people who vote NO simply because they feel that somehow the people in the eastern states are trying to get one over them. If it aint broke, don't fix it.

And then there's the crowd who say we already get more sunlight than the east, so we don't need daylight saving. Well, I say balls to that theory. Maybe we get more at 4.30am when it's about as much use as TOAB.

So I guess the question is, are you with me, or are you de-linting the woollen cardy and sharpening up the chopticks for a small night out with the zombie brigade?