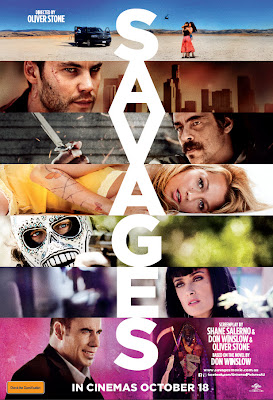 Bust out the *bongs Perth, because Freocookster's Follies and Tweet Perth have teamed up to provide you with a whole stack of free double passes to the advance screening of Oliver Stone's new thriller, Savages.

To win, all you need to do is visit the Facebook page - which you will no doubt already 'like' - and tell me in 20 words or less why you deserve a ticket.

You can also win tickets simply by re-tweeting my #Savages tweets via @freocookster, or via my Thunder Buddy @tweetperth. Don't forget to use the hashtag when you join in the conversation!

*Freocookster in no way endorses the illegal consumption of weed, ganja, pot, mull, dope, or anything else you wish to stick in your pipe and smoke it!

When: Tuesday, 28 August
Where: Event Cinemas Innaloo
Time: 6.40pm for a 7pm start

About the film
Three-time Oscar®-winning filmmaker Oliver Stone returns to the screen with an all-star ensemble for the scorching thriller Savages, based on the best-selling crime novel by Don Winslow, which was named one of The New York Times’ Top 10 Books of 2010.  Blake Lively stars as Ophelia, the girlfriend to two Laguna Beach entrepreneurs, one an ex-mercenary (Taylor Kitsch) and the other a principled environmentalist (Aaron Johnson), who’ve built a thriving homegrown industry on the best marijuana ever developed.  When they refuse to sell their business to a brutal Mexican drug cartel, Ophelia is kidnapped, and so begins an escalating series of ploys with savage consequences.  Filling out the stellar cast are Benicio Del Toro, Salma Hayek, John Travolta, Uma Thurman and Emile Hirsch.

Posted by Cookster at 2:35 pm No comments: 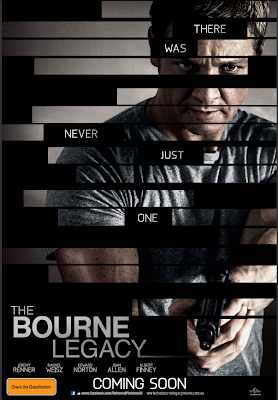 @Freocookster has 20 double passes to give away to the Perth preview screening of The Bourne Legacy at Event Cinemas Innaloo on Wednesday, 16 August.

To be in the running to win a double pass, visit the Freocookster's Follies page on Facebook, 'like' the giveaway post and tell me in 10 words or less "WHAT LEGACY WILL YOU LEAVE BEHIND?"

I'll pick 20 winners on Friday 10 August and contact you with details of how to collect your tickets. Fyi, this message will self destruct in 30 seconds...

The narrative architect behind the Bourne film series, Tony Gilroy, takes the helm in the next chapter of the hugely popular espionage franchise that has earned almost $1 billion at the global box office: The Bourne Legacy. The writer/director expands the Bourne universe created by Robert Ludlum with an original story that introduces us to a new hero (Jeremy Renner) whose life-or-death stakes have been triggered by the events of the first three films. For The Bourne Legacy, Renner joins fellow series newcomers Rachel Weisz, Edward Norton, Stacy Keach and Oscar Isaac, while franchise veterans Albert Finney, Joan Allen, David Strathairn and Scott Glenn reprise their roles.