The Howard and Costello stoush 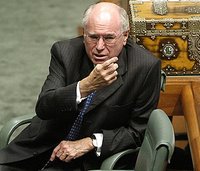 All this talk of "hubris" and "humility" between the Howard and Costello show is driving me to drink... c'mon boys, let's settle this leadership dispute the fair way: get Janet to grease you both up with a mixture of vaseline and dencorub, then put you in a plastic wading pool full of KY Jelly and let you slug it out!

Now eyebrows, before you get started on Costello's advantage because of his longer reach, remember that your arse is closer to the ground, therefore giving you added stability.

Of course, to make matters even fairer, how about we have lil' Lexie Downer as the judge and we send in about 400 peace keeping troops to quell any civic unrest... obviously we'll have to ask George Dubbya for his permission on this one.

Speaking of Dubbya, get him and his mate Dick Cheney over for the gig - tell 'em to bring Dickie Pound too just in case you boys try and slip in a few roids to gain the upper hand.

And a word of warning - there will be no punches to the nads ala Danny Kerr, or any Hopoate 'digit in the date' action... Johnny, don't look at me like that, look at moi, loooka moi!

Oh and did I say you'll be wearing nappies during this showdown? Ahhhh, Aussie politics, who needs the World Cup???
Posted by Cookster at 8:32 pm 2 comments: