The world of Socialnomics

This video sorta makes the hair stand up on the back of your neck.

There's no doubt that social media / networking is THE new way of communicating and engaging with the world around us, but some people really do still see it as some kind of fad. If that's you, then watch this video and give yourself a short reality check.

Hell, I never saw a computer until I was about 14 and that had a room to itself that could have housed a small family. I watched black and white TV until grade seven and thought Space Invaders was about as far as technology could possibly ever go. Hah, my first computer was a Commodore 64 - 64kbs, about as powerful as a calculator!

My point is, this change is happening and for people in the communications game it represents a whole new ball game. This beast is galloping along at a powerful pace and I reckon we all need to hang on tight and get ready for the ride of our lives.

Guess who's coming to dinner?

The West Magazine is running a competition asking people to name the five people they'd most like to invite to dinner and why.

Most of the celebrity responses in Saturday's mag were fairly pedestrian, but of course Luke Steele was suitably off-centre, listing Brobee from Yo Gabba Gabba, Al Green, Jane Fonda as Barbarella, James Stewart and Elvis Presley.

I think limiting the number to five is a bit harsh and points off to those who chose to list their partners in the mix - that's gotta be a given doesn't it? And besides, we want to hear about the people who interest you, not about how much you wuv your wife!

So off the top of my head, here's my list. Is there any way to avoid looking like a pretentious arse? I think not...

Hunter S Thompson: Okay, okay, I can hear the cries of wanker ringing out, but imagine the party favours he would bring to the table. And when it all gets too much we could simply dip into the ether supply.

Paul Keating: to remind us of a time when Australian politicians had some clout and could fire off a clever retort like a whip crack.

Carl Hiaasen: A ferociously funny environmental evangelist who writes about the rape and pillage mentality of land developers in Florida. I'd like to see him turn up as his alter ego - the character Skink who has a glass eye and stalks the everglades wearing a shower cap.

Robert G Barrett: author of the Les Norton series of novels that are absolutely compelling, despite being devoid of any literary merit whatsoever. Ideally we'd meet over schnitzels and ice cold Emundi Lagers at the Hakoa Club in downtown Bondi... ah, you wouldn't be dead for quids.

Melanie Safka: the voice that beguiled me back in the 80s when I thought my black suede winkle picker boots were way groovy and Melanie was singing just for me. I reckon both HST and Bob Barrett will have slapped faces before the night is through.

Okay, this was compiled without a huge amount of through and I fear the gender balance is somewhat lopsided, but you get the idea - your fab five???
Posted by Cookster at 11:35 pm 1 comment: 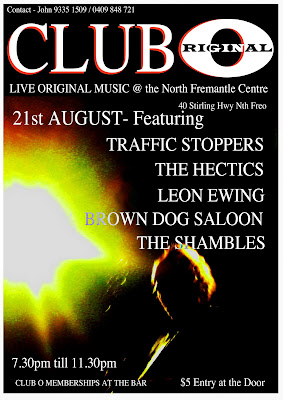 This Friday, 21 August sees another stellar line-up of original bands set to blow the roof off the North Fremantle Centre.

Club O - O for original - is barely a month old and has already cemented itself as a 'must go' Friday night gig for lovers of live original music from across Perth.

Doors open from 7.30pm and the entry fee is $5. Club O memberships can be bought at the bar... Cookster Senior will sort you out.

You can follow the NFC on twitter by clicking here.
Posted by Cookster at 9:39 pm No comments: 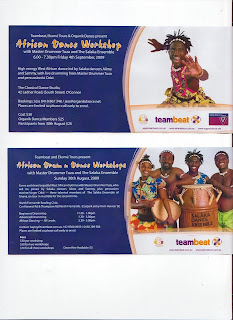 It's winter. It's cold, it's raining, the bowling greens are soggy and it's hardly the weather to prompt the desire for a cold ale. So what to do if you're heading down to The North Fremantle Centre this month?

Well, I'd suggest you grab an African drum and beat it to within an inch of its life!

On Sunday, 30 August, the NFC is hosting an 'African Drum 'n' Dance' workshop with Master Drummer Tuza and The Salaka Ensemble, on tour in Australia for just the second time.

There's a session for beginners and advanced drummers and African dancing for people of all levels.

If you can't make it to the NFC in August, there's another workshop taking place in O'Connor in September - click on the image for all the contact details.
Posted by Cookster at 9:54 pm No comments: