I was quite excited and somewhat amused by this online accolade, but my colleagues bought me straight back down to earth by proclaiming that they had always thought of me as the biggest twit in the office.

My, how they love their twitter, titter (hee, hee!) jokes...

Great to see The Worst of Perth also got a guernsey, but even better that it came in at a 'wince-making' number 9... just beneath me...

So if you want to follow me, please do. I'm not sure where I'm going. Sometimes I walk into doors. But I try to have fun along the way.
Posted by Cookster at 3:39 pm 5 comments:

Email ThisBlogThis!Share to TwitterShare to FacebookShare to Pinterest
Labels: freocookster, The Bloggers Guide, The Worst of Perth, top 10 perth twitterers


The North Fremantle Centre (Bowling Club) is holding two events over the next two weekends to raise money for the Victorian bushfire victims.

This Saturday night, 21 February, the Crackerjack series of stand up comedy nights (Ben Elton is Patron) will crank up a special show featuring Nick the Hippy, Ross Vegas, Josh Makinda and many more seriously funny people.

On Saturday, 28 February, the centre will host the Mayor of Fremantle's Bushfire Appeal from 4 - 8.00pm.

Tickets are $5 a head at the door and as well as hanging with Peter Tagliaferri, you can also enjoy live music, a sausage sizzle, raffles and a kids music competition.

Groove on the Green

Don't forget that every Sunday from 2 - 7.00pm you can get down and Groove on the Green with barefoot bowls and an open mic session.

You can join the facebook group here and keep up to date with all The Perth Files special member events.
Posted by Cookster at 8:46 am No comments: 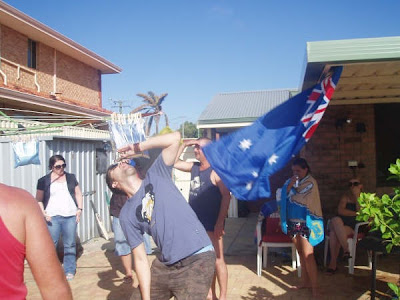 Some great images from Australia Day continue to filter through to The Perth Files and there is none better than this classic Baz Luhrmanesque masterpiece from Redcliffe.

These funsters chose to celebrate Australia Day in the traditional way, with a 'Goon of Fortune' hanging proudly from the great Australian Hills Hoist. Look at that man at work, suckling proudly from the shiny, metallic bosom of the Stanley Leasingham cask on a day out in Heathridge - where the cask remains tres chic.

The second goon bag in the background contains some quality Rose for the more sofistikated family members. You know, Aunty Gene who smokes those exotic Winfield Greens.

Note the classic wooden pegs holding not only the goon bags, but also (we imagine) the Australian Flag, unfurled and proudly flying in the 'Freo Doctor' - Perth's much loved and daily anticipated afternoon sea breeze.

Best dressed on the day was the gentleman captured here in the image, saluting the said Hills Hoist dressed in national costume, 'wife beater singlet and jocks, teamed with thongs', before he heads over to the tin shed to pick up the waiting cricket bat for the impending backyard cricket match.

A beaut day was had by all and when drained the goon bags were definitely given the full Oz-Day treatment and recycled into the obligatory bladder pillows.

It's tragic to hear the toll the bushfires are taking in Victoria right now, particularly given that I spent 11 years living and working as a journalist in various parts of Melbourne, including the Yarra Valley.

Indeed, my 'patch' of territory covered for the weekly Yarra Valley Post stretched from Yarra Glen, across to Healesville and then Yarra Junction. My very first day out was a trip to Mount Donna Buang to cover the season's first big snowfall - it was the first time I'd ever seen the stuff!

To now be watching this bushfire tragedy unfold from afar seems quite surreal. Just four years ago, Victoria was still my 'adopted' state - now I'm on the other side of the country knowing what's going on, but feeling it only via news reports and messages from friends that somehow only conspire to make it all the more distant.

It was back at the Post back in January 1997 that I was part of another bushfire that took hold in Melbourne's Dandenong Ranges. I posted about in a few years back, but though it might be worth sharing again.

I was working on a paper out in Ferntree Gully, in the foothills of the Dandenong Ranges and remember very clearly the first signs of a fire that went on to claim three lives.

I had wandered out to the front of the building on Burwood Hwy and noticed smoke rising from very close to the summit of the Ranges, near the television towers. It was a hot and windy day of around 35 degrees and it had been preceeded by a whole string of hot weather, similar to the current situation across Victoria.

It was fascinating to watch as that fire quickly took hold, with flames clearly visible licking the crest of the mountain and sending eddies of smoke and flame high above the undergrowth. A wind change then sent it in off in another direction, with one fire fighter later commenting on how the fire front quite literally jumped over his head as it roared back over the crest of the hill.

While attention was focussed on that fire high in the hills, another blaze was supposedly deliberately lit at the base of the Ranges in a suburb called The Basin, near Upwey. That fire, which I spotted when it was still relatively small and close to the Highway, turned into a raging inferno that blackened the sky above the eastern suburbs - it looked for all the world like a volcano erupting.

It was this fire that climbed rapidly up the other side of the mountain and caught three residents of Seabreeze Avenue, Ferny Creek, completely by surprise. Reading transcripts from the coroners' report, it would seem that the couple and their neighbour were confused by the direction and speed of the second fire and by the time they realised the danger, it was too late to evacuate.

Watching this all transpire from the safety of Ferntree Gully made it seem like a special effects movie on a super large screen. I actually covered activities in the Dandenongs as part of my paper round and to watch this fire consume bushland that I had travelled through regularly and take the lives of people I may well have stood with in the same line at the supermarket, was a sobering experience.

In the days, weeks, months and even years after the fires, the scarred landscape never failed to jog my senses as I wound my way up the mountain.

Here's hoping that loss of life isn't repeated again this summer and that we here in Perth don't face similar threats as the temperature continues to rise.
Posted by Cookster at 5:38 pm No comments: