I love books. I love the covers, the smell and feel of the paper and the way they all interact as one big literary organism in my cubist Ikea bookshelf.

And as a lover of books I have my favourite authors, many of whom are Australian. Among them are Nick Earls, John Birmingham, Andrew McGahan, Shane Maloney and Robert Drewe.

So when I scanned the list of Perth Writers Festival drawcards for 2012, I was chuffed to see Nick Earls and John Birmingham joining WA's own Stephen Scourfield for a discussion about Bromance in the modern fiction novel.

I was even more chuffed when Nick Earls tweeted to see if I was up to join them afterwards for drinks and, perchance, wax lyrical. Even better, JB offered up four free tickets, so I was able to bring along some fabulous Perth tweeps: @epigrammist @kitta and @theflyingdamsel.

I'm still unclear as to who came up with a concept of a literary panel discussion on the theme of Bromance, but it soon opened up into a wider discussion fueled by robot sex, bucket bongs and lewd acts involving glass-topped coffee tables. And let's not forget the 'luther' and Stephen Scourfield's moderno-Italian accent that for some reason left me with the Dolmio theme in my head.

Post-Bromance we all headed down to that most curious of writers festival phenomenons, the book tent and signing table. The punters file in one end of the tent, purchase their selected paperbacks and then shuffle back out again to have them signed by one of the authors.

JB and NE took their seats on the table, but something was horribly askew. Of the eight or so authors at the table, only one grey haired bloke in a navy blazer was managing to draw a crowd - in fact he was in danger of a carpal tunnel injury.

The bloke in question was the Hon Michael Kirby AC, CMG. Fair enough.

I'm sure there would have been more signings all round, but the one cash register inside the book tent was having issues coping with the long line of people now snaking out the door.

So we left Michael to his legion of fans, picked up a sprightly Frank Moorhouse on our travels and went in search of red wine. Talk soon moved on the the affects of gastroenteritis, how Nick and I share an unhealthy fascination with fortune cookies (read his latest book The Fix) and Krissy Kneen's use of snails in erotica - you had to be there for the context.

A thoroughly enjoyable night that ended up over free drinks at the Boulevard Hotel's 1st Birthday party and way too much leftover food. JB will forever associate me with wastage of gourmet sausage rolls. 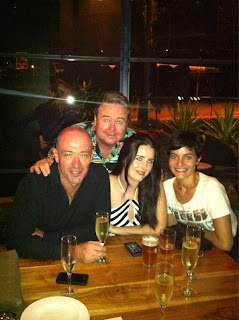 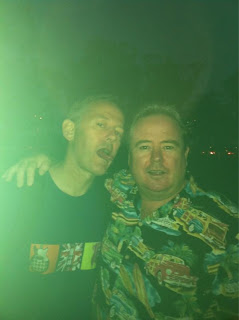 This is the real deal... for everyone who's over the 2012 predictions already :)