Crap Elvis is on the road 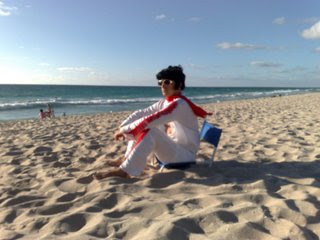 Former 96fm funnyman, pommy geezer, ant impersonator and all round top bloke, Matt Hale, is on the road for a world tour in his latest guise, Crap Elvis.
Yes, not content to take on the world in a selection of long shorts and loud shirts, Matty instead opted for a crap $30 Elvis suit and hence, Crap Elvis was born.
I recall discussing the plan late last December over a number of drinks at the PPR Christmas Party, where oddly enough he was in civvies while I was doing my best Crap John Belushi, aka Jake from The Blues Brothers, impersonation.
Little did we both know that the concept would engulf the world media faster than a West Aussie bushfire, sparked largely by a 'Hunka, Hunka, Burning Toast'. Yes, while the US script writers have put away their pencil sharpeners, Matty is on fire, penning such greats as 'Be My Terrorist' - 'strap a bomb around my waist and put a bomb on it, oh let me be, your terrorist'.
The toast of the Parkes Elvis Festival in regional New South Wales, Crap Elvis has swept all before him in taking out awards for being the worst looking and worst sounding Elvis EVER.
In an exclusive interview with The Perth Files, Crap Elvis has confirmed that his crapness has exceeded even his wildest expectations. "I knew I was crap, but until you actually get up on stage and convince the crowd to start waving their toast in the air, you can't know just how utterly crap you can be - it comes from a place deep inside me," Crap explained.
Take heed world, Crap Elvis is coming your way and I for one can't wait to see the footage of our man in the cheap faux satin suit belting out a rousing rendition of 'Be My Terrorist' at the Alabama State Fair and White Supremacy Convention.
Posted by Cookster at 9:05 pm 7 comments:

Pot calling the kettle a monkey? 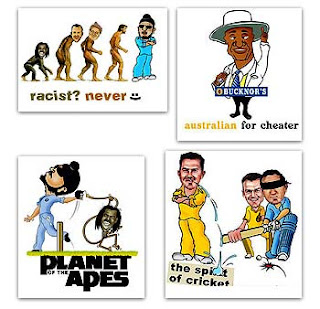 Nah, calling a bloke a monkey isn't racist - what's wrong with Andrew Symonds, can't he take a joke? Instead he should have given Singh a friendly punch on the shoulder, called him a curry munching rag head, had a good laugh and trotted back to mid on and got on with it... crikey, sensitive or what!

But Brad Hogg, well... talk about stepping over the mark. Fancy calling someone a BASTARD! The ICC should suspend him immediately and put him through a three month anger management course - yep, I've always thought that affable sheep farmer with the overactive tongue approach was simply a front for a very angry, angry, spiteful man.

And Gilchrist! Oh yes, all well and good to spend most of his free weekends in Perth helping out at the local Auskick and Have a Go Cricket Clinics, then drop in for a visit to Ronald McDonald House where he's the Patron... but it's all a ruse! Underneath that good guy exterior is an evil genius plotting the downfall of subcontinent cricket with his evil primate mates Ponting and Symonds.
It's a disgrace I tells ya - sack 'em all!
What right does the ICC have to believe that Singh called Symonds a monkey? It's not as though he's done it before has he? Oh dear, he has?
Anil Kumble, what a vision of sportsmanship - how does the saying go? 'I'm pulling up my stumps and going home, screw you guys'. Good on him. Nothing like a good old whinge over a bowl of sour grapes when you lose a game of cricket I say.
And while you're at it, why not really spit the dummy and play tit-for-tat on abuse accusations - you reported our leading spin bowler, so we'll report yours... nah, nah, nah! But come on Kumble, 'bastard' is a term of abuse that's hardly likely to change the course of international relations, how about dragging out the 'C' word, or maybe you could say he called you a 'bitch' or 'ho' to make it a cross gender thing.
At the end of the day the most satisfying outcome is seeing the good people of India rightiously going about their business of burning effigies of black men (the other black men), most notably Symonds and Bucknor. Boy oh boy, and the t-shirts are a great touch - how imaginative and so subtle in their message - what a great time to be an Indian cricket supporter!
What the ICC has to recognise is that it isn't the world body in cricket - it's the Board of Control for Cricket in India. It's a cheek that the Indian side should even have to leave its own shores!
I for one will be wearing my best gorrilla suit to the WACA test and proudly putting my Bic lighter to the Australian flag - enough of all this monkey business and let's hear it for the Turbinator!
Posted by Cookster at 9:53 pm 4 comments: