The Worst of Perth - Richie Benaud 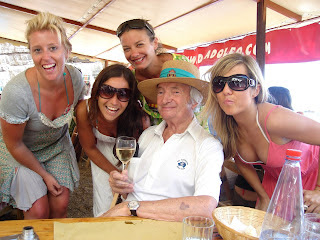 A shout out to the peeps at The Worst of Perth and that very funny man The Lazy Aussie (TLA), who is responsible for driving at least half of the 5-6 people who visit this site every day... okay, maybe there are more, but it's not like there's any danger of The Perth Files melting down from a traffic overload.

Anyway,Teh Cookster has become quite the fan of TWOP and very happy to supply the odd pic or video where I feel they may have TWOP potential, ie, the current Richie Benaud image and the Subi Oval poo vid that is causing the boy so much angst.

So, once you've finished here --- and please stay as long as you like --- get over to The Worst of Perth and join the merry gang in a bit of banter on the very best of the worst things our fine city has to offer.

Oh and be sure and tell your friends to visit. And please be my friend on facebook... Needy? Clingy? Just plain creepy? You betcha!
Posted by Cookster at 9:25 pm 1 comment:

Email ThisBlogThis!Share to TwitterShare to FacebookShare to Pinterest
Labels: perth, The Lazy Aussie, The Perth Files, The Worst of Perth, TWOP

A well crafted blog by Stephen Bevis, Arts Editor of The West Australian, on the dilema facing the Perth populace over the redevelopment of the Swan River foreshore.

He's right on the money when he suggests that erring on the side of caution on this one is destined to leave us with something second rate, a 'coulda been' development that promised so much more.
Posted by Cookster at 10:05 pm No comments:

The Pope down under 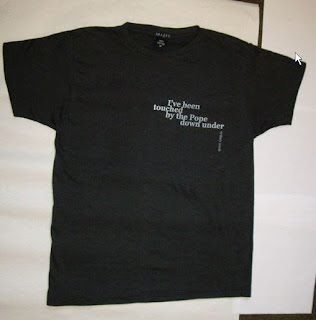 Great to see that some creative minds have started cranking up the Pope merchandise, although a bit too late to take advantage of those cashed-up young Catholics who were here in numbers only a short time ago.

You could store this little number in your drawer alongside your Pope-pourri.

I'm a bit shagged today to be honest. What with all those mountain stages of the Tour De Doping over the past few nights, a man has his limits. If you see me heading towards the edge of a steep cliff with a deep valley below, be sure to throw some Powerade in my fatigued face, or at least grab me by the sissy bar.

Good job I don't actually ride a bike. Unless it's some kind of holiday thing to keep the kids happy, or I'm at Rottnest where the bastard bike is the only form of land transport.

But I digress. What I wanted to talk about was what is probably the world's most over-hyped, but completely useless product - super glue.

Over many years I've kept a miniscule tube of this crap in my 'handyman's kit' --- Grandad's old Gladstone fishing bag --- and pulled it out on occasion to fix the unfixable. Success rate? Zero per cent.

Today I tried bonding two bits of smooth, clean plastic together --- standard fare --- and I even clamped it together for 10 minutes. Nothing. Could have achieved a better result with Clag and there wouldn't be any chance of glueing my hand to my penis when I went for a mid-job leak.

The stuff appears to be bloody fantastic when it comes to bonding human body parts, but have a crack with wood, plastic, metal, ceramics (think cracked bong many, many years ago... man) and it is the proverbial tits on a bull.

Okay, maybe I'm doing it all wrong, but if that was the case I think I'd be in care, with a bib around my neck to catch the drool. Maybe I should be. But can ANYONE out there share any stories of success with super glue? Please!

I recall the ads where some construction worker dork is suspended from the ground by his helmet (on his head... keep it nice!) which is superglued to a rafter. Quite a line in bullshit I'm thinking. I'd like to see the company CEO try the same trick at about 800 metres.

Your thoughts?
Posted by Cookster at 4:42 pm 3 comments:

Bring back the Pope Scope!

Well, the Pontif has come and gone, leaving a lot of Catholic youth facing their biggest comedown since the red cordial days.

Sure it was great to see old Ratzy out there on the Harbour, donning the policemen's hat, pressing the flesh, etc, etc, but I'm a little non-plussed with the lack of merch being peddled on the streets.

Where the hell... excuse the blasphemy... are the Pope's authorised tour t-shirts and bomber jackets? Why can't I get my own souvenir pointy hat? You would have at least thought we'd see a few old man Pope masks, or Papal staffs that play a burst of 'Wassa Matter You?' when you press a button on the handle.

Sheesh! Back in the day when we had the last Papal appearance, good old WA Salvage had the foresight to mass produce carboard 'Pope Scopes' - I guess it was Luigi's RC upbringing that prompted this wise marketing decision. And you know what, I did sava-da-money and puchased at least half a dozen of these crude, yet highly effective periscopes.

Sadly, they were all stolen by crack heads and heathens back in my university days, so I can't show you the design. And no, I never actually spotted the Pope, but those suckers were just the thing for live gigs and keeping an eye on our attractive next door neighbour.

For the love of God, someone please tell me this occasion didn't go by without nairy a Pope scope in sight? Surely not???
Posted by Cookster at 2:43 pm 4 comments:

Only in America Part II 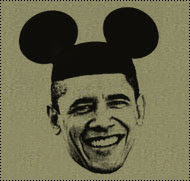 Of course, the same group that is falling over itself to support the AFA in its homophobic boycott of McDonald's, also retails a dandy line in neo-conservative t-shirts.

If you're a right wing nut job and you want the world to know it, WorldNetDaily can fit you up for a pro-gun, anti-Obama, kill the pinko, t-shirt of your choice from small sizes to suit the kiddies, right up to your XXXXXXL grandaddy of 'em all.

Here are a couple of my favourites, although the 'Meat is Murder... tasty, tasty murder' and 'Pave the Whales', complete with a bulldozer running over said whale, takes the cake for sheer bloody-minded stupidity.

Let me know if you have a leftist slogan that can match it with this lot.
Posted by Cookster at 9:46 am 1 comment:

The Secret Diary of Steve Jobs: Proof that God exists and has a sense of humor

The Secret Diary of Steve Jobs: Proof that God exists and has a sense of humor
Posted by Cookster at 4:49 pm No comments:

Lordy, lordy, pants on fire! Yes, in another example of how some things can only ever happen in the US of A, deep, dark conservative right group the American Family Association (AFA)are boycotting McDonald's because they claim it supports and encourages homosexuality.

According to US-based blog Think Progress:

AFA is upset at McDonald’s for refusing to condemn Vice President of Communications Richard Ellis’s decision to serve on the Board of Directors of the National Gay & Lesbian Chamber of Commerce (NGLCC). AFA President Donald Wildmon said the situation is “strange” because “it’s the family that McDonald’s appeals to — children’s playland, you know, all the little toys, all of that. And they are promoting a lifestyle that would utterly destroy the traditional family.”

Okay, "all the little toys, all of that." So I'm assuming that Don's belief is that gay people don't have an appreciation of playland and toys... possibly too busy having rampant sexual encounters in leather bars, or trying their hardest to get into poor Don's well starched y-fronts?

I have to say, in my years of public relations work for the Golden Arches (yes, I do PR work for McDonald's in Western Australia), having to prepare a statement to combat this sort of homophobic, red neck agenda, is something I haven't yet had the pleasure to do.

Here are a few comments that have been posted on the Boycott McDonald's website:

"WE GO TO MCDONALDS FOR YEARS. NO MORE. WE WILL NEVER SET FOOT IN YOUR PLACE AGAIN. I AM SICK AND TIRED OF FAMILY PLACES APPROVING THE GAY LESBIAN ALLIANCE. NO MORE KIDS MEALS FOR US. AND MANY OTHERS WILL BE TOLD ABOUT IT."

Sweet jesus, we're talkin' some real homeland folks here, the sort of people who still cheer at the final scenes in Easy Rider where Hopper and Fonda get blown off their choppers. Yes siree, aint no diversity 'llowed round those parts, whether it be racial, cultural or sexual.

And there's nothing like a sweeping statement that homosexuality "is one of the major reasons that Greek and Roman empires fell". Well, ah don't rightly know if a bit of mano-a-mano action really had much to do with all that Jim Bob, Billy Joe or whatever name your Mama (or was it your Sister?) decided to annoint you with. Maybe you just fell off a rogue steer, hit your head and you aint thinkin' straight?

This one's a real cracker:

"Dearest McDonalds, I am deeply saddened at your decision to sponsor the sodomitic lifestyle. Thoughts have consequences, which usually lead to actions and it seems that McDonalds has caved to a few sodomites that believe that their choice to have sexual relations with the same sex is on par with other true civil rights. I am sorry to say that my limited discretionary spending allocated to fast food will now go to any other restaurant besides your own. McDonalds...Think things through and seek the will of God, not the will of people who believe that their physical urges to have sex in an un-natural manner have any priority what-so-ever. Good Luck...:("

But of course, this person, obviously not "sodomotic" only ever has sex in a perfectly "natural" manner. Or maybe she isn't getting any at all?

The common thread in all these comments is that these people want McDonald's to remain "neutral". Well, I'm sorry, a company that employs and serves a diverse range of people who are white, black, asian, hispanic, straight, gay, christian, muslim, jewish, rastafarian, etc, etc, etc, is socially obligated to support their rights as independently thinking human beings.

It's the bloody minded and ignorant members of society who think their way is the be all and end of of civilisation that pose the greatest threat to our way of life. Maybe our more progressive companies recognise this and are quite happy to leave you behind as they move ahead with the times?
Posted by Cookster at 10:09 am 2 comments: