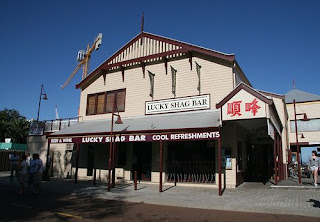 I had an interesting chat over the weekend about all this waterfront development hoo-ha with a bloke from the UK who knows a thing or two about tourism and the creation of city entertainment precincts.
We first caught up some months ago, both stretched out on a large tract of grass in the midst of well heeled Claremont watching our kids play cricket.
When conversation on the subject of gout drew to its painful conclusion, we turned to another topic of much angst - how boring Perth is.
I asked him his views on our fair city, having lived much of his life in the throbbing metropolis of London, and his answer went something like this:
'The day after I arrived I wandered out of my hotel, across Langley Park and took a long walk along the river. And you know what I thought, why would anyone want to change this, it's spectacular!
"I did the same thing the next day and again, couldn't understand why they wanted to change the waterfront.
"The following day the excitement started to wane just a little. After a week I looked out of my hotel window and decided, bugger it, I'm bored shitless and I went in search of somewhere on the river where I could grab a coffee and some breakfast.
"That's what led me past the entirely uninspiring bell tower, onto the Barrack Street Jetty and into... no way, you're taking the pish... The Lucky Shag".
We both chuckled over this, checked to make sure our kids weren't hitting each other with cricket bats and then mused on what could be done. Before too long the Sunday morning gout was playing up again, the kids were pouring 'raw' Milo down their throats (sponsor) and it was time to fire up the people mover for the trip home.
We agreed to talk further over a few beers at Perth's premium waterfront entertainment spot, The Lucky Shag... who knows, we might just get lucky!
Posted by Cookster at 10:10 am

Sigh...the waterfront...i hate to disappoint JC's disciples, but i can't get excited about it. yes the waterfront is boring but the CBD isn't a place i have strong feelings about or where i spend a lot of time.
a city is what you make it. melbourne is very liveable, but i know boring people there. just because they live in a great city doesn't make them more interesting. tel aviv is a dog's breakfast of design and planning, but it IS the most exciting metropolis in the world!

Ah the Shag. It's always a laugh when the Poms are in town as it's the official Barmy Army HQ, but now it's also my official Beer O'Clock pub since it's the closest establishment to Zee Cort.

Although, now that I think about it... it might not be the best place for Office Drinks... the number of sexual harassment claims could go through the roof...

As much as it is DESPERATELY needed, I fear that the latest idea for the waterfront will end up like every other proposal over the past couple of decades.

We'll get the pretty artists impressions, we'll have a robust and heated debate on the topic for a few months, but it will inevitably peter out into nothingness.

In the wash up, we'll just be left with a big patch of grass. Super.