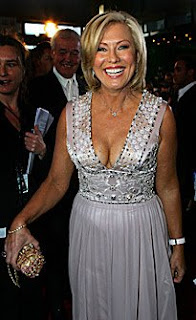 I'm not normally spooked by Friday the 13th, or the number 13 in general - both my wife and sister were born on the 13th and I'm yet to find the number of the beast tatooed on their heads... I have looked though.

However, this Friday the 13th was different, thanks largely to that blonde woman of indeterminate age on TV who reportedly used to be Kerrie Anne Kennerly.

Yes, I was doing the dad at home routine and inbetween mopping up sodden toast crusts and soiled nappies I sat down to check out Mornings with Kerrie-Anne, just to see how the old girl was travelling. When I worked at Channel Nine in Melbourne for a year, I shared an office with a larger than life framed photo of Kezza and a box of muesli once owned by Frankie J Holden, so I look on her as on old friend... how old I'm not exactly sure.

Anyway, after initially being taken aback by the bigger than big hair and ever deepening cleavage, I noted that she'd taken on a Friday the 13th theme - gravestones, plastic skeletons, lava lamps (WTF?) etc. And all her guests were involved with 'spooky stuff', including a white witch with a head of hair that looked like a stage prop... or a well groomed mop.

One of the the statistics they threw up on the show was that on Friday the 13th there is a 60% increase in traffic accidents. Great, I was taking the baby, a three-year-old and my son on a trip half way across Perth later that day and not only was I taking on Australia's worst drivers, I was now 60% more likely to encounter one that was totally wigged-out by superstitious Friday the 13th voodoo shit.

But hey, the weather was good, visibility excellent and the people mover in better working order than most Qantas jets... so off we went.

All went well for the first third of the journey and we were almost at the Leach Highway exit on the freeway when my nuff-nuff radar burst into action. Hello, hello, those boxes on the back of that ute don't look too stable. Hmmm, why is he driving like that. Okay, let's hope that box about to topple onto the road is empty...

Of course it wasn't empty. It was full. It was full of a large piece of steel, commonly refered to as a washing machine. Box hits freeway 10 metres in front of me, I brake slowly but forcefully, washing machine comes flying out of the box and skids across into the centre lane in a shower of sparks. Luckily, no one was in that lane next to me and even luckier still that the freakin' thing didn't head straight back into the people mover - I don't know what would happen if you hit a washing machine at 80 clicks, but it can't be good.

So we continued on our journey and finally got home safely, with nairy a whitegood in sight for the remainder of the trip.

Next year I'll stay at home and do a few loads of washing instead. And if the Miele even looks like trying to go me, I'll give it a swift clip around the soap tray. Thanks Kezza.
Posted by Cookster at 8:57 am

That sort of thing doesn't happen on Rottnest. Not on Friday the 13the anyway. Why didn't you stop and salvage the whitegood?