Australia the movie - what you don't know 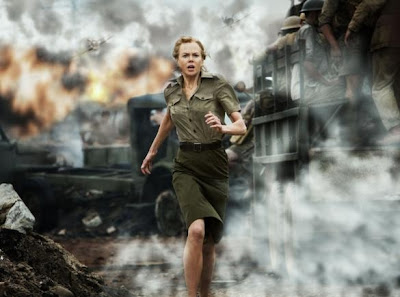 To be honest, I've never been a big fan of the big screen period drama, particularly when there's a faint whiff of Mills & Boon romance mixed in with the gumleaves, billy tea and horse poo.

It's the reason why I've never seen that over-salted, soggy sea cracker Titanic and probably never will. Too much schmaltz and seaweed makes for a nasty stink in my books.

But Baz Luhrmann's Australia is an Aussie classic, maaate! It's got Our Nic and Big Bad Hughie Jackman running around this vast bloody Western Australian bushland half naked, it's got war, it's got weird references to the Wizard of Oz and it's got REAL indigenous Australians in the cast.

God damn, it's the film that's supposed to stab Crocodile Dundee to death with its own hunting knife and bury the carcas under a rotting log never to cast its shadow across the oz-stereotype again.

Sifting through all the hype, to my eyes Australia was looking about as authentic-oz as a smear of Marmite on a piece of German rye. A few roos short of a top paddock.

But that was until I came across - let's call him David - an Aboriginal bloke and his wife hanging around to one side of a Western Force sponsorship announcement at Ronald McDonald House in Subiaco.

"David worked on that film Australia," someone whispered.

I wandered over and introduced myself, asking what he worked on during the project. 'David' explained that Baz had employed him to ensure the authenticity of the Aboriginal language captured on film.

"It was lucky," he said. "If they'd filmed a few kilometres further north it would have been another language spoken in that country and someone else would have got the job."

David had just got back to the Kimberley after a couple of weeks post-production work in Sydney. He and his wife had bought their son down for treatment at Princess Margaret Hospital and were staying at Ronald McDonald House while they were in town.

"Don't like this cold weather," he said with a rue smile.

To him the work was no big deal. He was just a bloke from the Kimberley who was lucky enough to land a job with a pretty big film that rolled into his corner of this vast continent. His son also managed to land work as a stand-in actor to one of the lead cast members.

It was after this meeting that I decided that yes, I would go and see Australia at the cinema and add my few dollars to the gross ticket sales that determine the success or failure of a film.

If Baz was prepared to go to such lengths to ensure the authenticity of the Aboriginal language spoken in that particular area of Western Australia where the film was shot, then he's got my two thumbs-up.

I might still walk away less than moved, but that sort of attention to detail deserves respect, maaate!
Posted by Cookster at 10:40 pm

The Poms were always odds-on to pan it... miserable pricks! Imagine filming the same story-line in the UK?

interesting.. i'd like to go and see this movie :)

Thanks for nice review for Australia Movie. I Have also heard many good things about this movie that it has very fantastic and interesting story. So I am very excited to Watch Australia Movie.

Really effective data, thanks for this article.

This won't really have success, I believe this way.