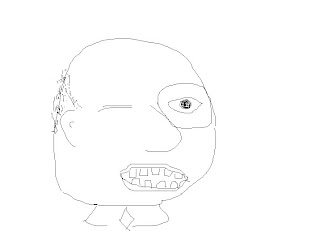 This just in from the Melbourne Desk. Your correspondent is B Hawe, keen observer of the human form, Harley Davidson mechanic, stockbroker and purveyor of fine 'erb... mon.

It was a hot and muggy day in Melbourne yesterday and storms were forecast for the afternoon - on these days I leave the bike at home and take the tram - very civilised, tram commuting.

As it turned out, 2.30pm brought the biggest downpour we have seen in 6 years or something. It was like Brisbane weather in December - hot and steamy.

There I am on the tram at the end of what I wished was going to be a busy day, but was an absolute dud. I sat down opposite a bloke who looked very very unusual. When you're sitting 2 feet away from someone opposite, it's hard to really examine their face in detail, you sort catch glimpses when you can. This poor bastard had had some kind of surgery and it was a pretty good job. But it wasn't perfect. If it were perfect, I wouldn't have noticed anything unusual, but there it was, a scar that circumnavigated his eye socket. It was hard to look at but, like the train wreck, it was hard not to look at.

Unfortunately, to add to his disfigurement, he was not what you would call the most attractive old bugger that you can imagine. He was a bit like Homer Simpson's father, but an uglier version. I tried to draw a sketch of him (attached), but even with my excellent portrait skills, it doesn't do him justice. Have a look anyway. This chap had a face like a smashed crab, he sat with his knees straight out in front of him - how annoying is it when you're on a tram and the person opposite makes no attempt to give you any room. As a result, his knees kept knocking into mine. I moved mine out to the side. It was like they were magnets...attracting each other...knock knock bump touch. Instantly I thought this is just my luck that he'll be on the tram until my stop or a couple before...that drives me nuts. An annoying fellow traveller, you can't wait to get off and they stay on until about your stop. That's NOT civilised. Whenever he wanted to look at something outside the tram, he almost had to turn his whole body. Unusual, but not uncommon.

Did I mention it was hot and sticky? Well it was. Many people fall asleep on public transport here - I'm sure it's the same everywhere. The curious thing is that this chap was no different from us all, even trapped in that disfigured face of his...God I wish I could stop glancing at his mug. He was falling asleep too. It must've been a hard day at the ugly stick factory - I assume he was a tester. I should give thanks that he had no BO as many chaps and chapettes do on days like yesterday. Anyway, he began his impersonation of the nodding dog we have on the back bench of our Valiant and duly started to nod off to sleep.

This is where it gets really unusual. You see he half nodded off. Can you do that? I hear you ask. Yes you can. When you have had what appeared to be a fairly major operation on your looking-gear, chances are that the old eye was no longer of any use. He had a glass replacement. The glass one did NOT fall asleep. That's right, he was asleep with one eye open, it was sort of funny, sort of disgusting, sort of cool. He could, in theory, keep an eye on his wallet and catch up on some shut-eye (not shut-eyes) at the same time. The only thing missing from the whole picture was some drool out of the side of his mouth.

The old saying about talking a glass eye to sleep now hold true and relevant meaning for me.

Gna just share my views from top to bottom as I see them.
I feel this is a good simply because it’s consistent with how the user is used to seeing the comment form and filling out information in general. Filling out the name and email wont take me much time, and if you really wanted to go ahead and type the comment first, you can do so, not really that big of a work around. I’m .
study abroad