A WAAPA of a night at Crackerjack's 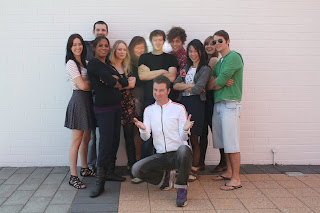 The North Fremantle Centre's Crackerjack’s Comedy Club will be awash with guffaws and a cacaphony of chortling as it plays host to an evening of comedy from the WA Academy of Performing Arts (WAAPA).

WAAPA's third year actors will be putting their improvisational skills to the test on Saturday 22 May with their inaugural 'Impro Comedy Night'.

The 17 young actors, hailing from all over Australia and all graduating later this year, will provide the audience with a unique opportunity to see Australia’s stars of tomorrow before they take off to pursue their artistic careers in Australia and overseas.

Leading local comedian and 2009 National Theatre Sports Champion, Glenn Hall, has been working with the students this year on the skills and secrets of improvised comedy.

And this is what they promise...

The actors, inspired by suggestions from the audience and facilitated by Glenn, will create incredible characters and perform outrageous sketches with only seconds to prepare and with hilarious outcomes!

The laughter is, of course, for a cause. The students are fundraising towards the production of a DVD demonstrating their film acting to be used as an example of their finely honed craft and talents when seeking employment in the entertainment industry.

So get a gang together, come on down and join in the fun, laugh a lot and prepare to be impressed – very impressed!

Tickets can be purchased on the door and Crackerjack’s can be found between Thompson Rd and Stirling Hwy in North Fremantle. If you reach the Swan River you've gone too far. And you'll be wet.
Posted by Cookster at 3:18 pm

Great post! Keep it up the good work and also keep posting.

Wow, there is a lot of useful data above!