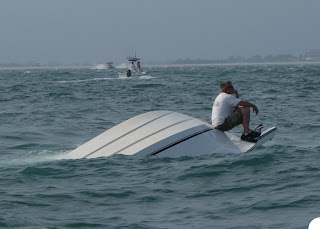 The third of my Wangle columns - click here to visit the original story.

Bumper stickers say a lot about the person who drives the car.

For example, the other day I was wandering back to the car from a family event, enjoying the Sunday sunshine with the kids, when something caught my eye.

It was a bumper sticker on the rear of a blown-out SUV that was half blocking the footpath – a map of Australia with the words printed inside, ‘F*** Off, We’re Full!’

It’s a message we’ve all seen many times and it’s nothing new, but on this day Mr 10 noticed it too. He cocked his head to one side, furrowed his brow, and asked me, “Are people allowed to have the F word on the backs of their cars?”

I responded, “Only very small minded nuff-nuffs son. People who are proud to put their hands up and say I’m a racist – check me out.”

In a flash I’d made an addition to the message thanks to the dust that covered the back window. The message now read, ‘F*** Off We’re Full – of Racist Pricks Like Me!’ If it was your car, I’m sorry. Sorry I didn’t let your tyres down while I was at it.

The saddest thing about this encounter wasn’t having to explain to my son that some people feel threatened by people of non anglo-saxon origin coming to our country. It was knowing that this was a family vehicle and all the occupants, right down to the toddler in the booster seat, would be tainted by this attitude in some way.

Now don’t get me wrong. I’m all for free speech. I had a chuckle at a sticker on a ute this morning that read, ‘Cheer up Emo Kids!’ I winced at the ‘I Fish With a Stiff Rod!’ sticker and was bemused as to why you’d advertise the fact that you’re a big Bundy drinker, but I wasn’t offended.

Not so with the ‘FOWF’ sticker. I don’t appreciate my kids having to read this sort of crap on the backs of your cars, on t-shirts, caps or novelty boxer shorts.

Knock yourself out when you’re at your own dinner table or down the pub with your like-minded mates, but sharing the message in public is just dumb. And offensive. What, you think we’re gonna come up and shake your hand, maybe make you PM for a day so you can turn back the boats single-handedly armed with nothing but a pointy white hood?

No, most of us just cringe, shake our heads and hope our kids don’t see it. Peel them off, please.
Posted by Cookster at 9:05 am

National pride need not be confused with xenophobia.

I've had conversations with people who support the FOWF perspective and as a result I've come to believe they're not racist so much as "culturalist".

I'm not sure they hate anyone for their skin colour. I suspect it's more to do with different religions, languages and ways of life.

So I believe racist is the wrong word. I think bigot is far more appropriate.