The last slice of the pie? 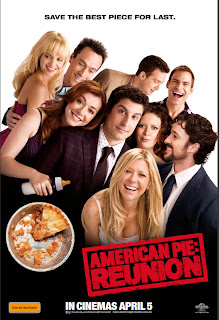 Nothing makes you feel older than a reunion movie where the characters are still younger than you were when the original film was released (1999).

Then throw in a line from one of the characters describing a Spice Girls hit as "classic rock" and I'm one step away from setting up home in a 'Lifestyle Retirement Village' to while away my remaining days in a Jason Recliner.

But hey, as The Stiffmeister might say, you're only as old as the woman you're feeling. Oh dear...

Yep, it's 'American Pie: Reunion' - park your political correctness at the ticket counter, set the humour dial to 'juvenile' and prepare yourself for 100 minutes of sheer good fun. More fun than a sock full of KY Jelly, where this (probably) final slice of the American Pie juggernaught begins.

American Reunion isn't a particularly well crafted film and plot is just a four letter word that doesn't rhyme with dick, but it's the dialogue that keeps this pie cooking.

And most of the outrageously non-PC lines are straight out of the mouth of Steve Stifler (Seann William Scott). "He might be a dick, but he's our dick", according to Jim (Jason Biggs), the original perforator of pie who spawned the film's title.

While it's Stifler who keeps this tale ticking along, the other characters provide the perfect comedic foil. In particular Jim's Dad (Eugene Levy) who shares a particularly memorable scene with Stifler's Mom (Jennifer Coolidge) that will have you choking on your popcorn. Some advice - don't get up and leave as soon as the credits roll, or you'll miss out!

If this is the last slice of the pie, then rest assured, the last bite tastes as good as the first.

Synopsis:
In the comedy American Reunion, all the American Pie characters we met a little more than a decade ago are returning to East Great Falls for their high-school reunion. In one long-overdue weekend, they will discover what has changed, who hasn't and that time and distance can't break the bonds of friendship. It was summer 1999 when four small-town Michigan boys began a quest to lose their virginity. In the years that have passed, Jim and Michelle married while Kevin and Vicky said goodbye. Oz and Heather grew apart, but Finch still longs for Stifler's mom. Now these lifelong friends have come home as adults to reminisce about-and get inspired by-the hormonal teens who launched a comedy legend.

Wow...great tips. I love blog hopping and enjoy giving comments to interesting articles. As to social networking sites, I need to set up one soon. My blog is barely three months old. I need to learn more SEO stuffs. Thanks for this post. :)