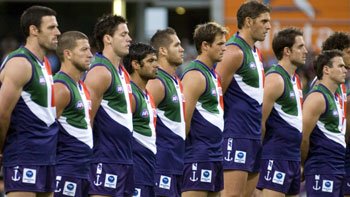 There's a sniff of purple in the air... the mighty Fremantle Dockers are marching towards September action and we're feeling confident about our chances for the first time since inception.

For my fellow Freophiles out there, gearing up for the critical game against Port tomorrow night, get ready to gear up in traditional / rave / head-banging style with the Freo Finals Party Pack that has been lovingly complied by fellow Freo blogger and dockerland.com regular Range-Raver.

Not only do you get the club song and his fabulous Purple Passion re-mix, you also get that adrenalin pumping post-win favoutite, TNT - ahhhhh, ACCA-DACCA's never sounded sooooo good!

And if you're in the market for a Flashing Purple Anchor or three (who wouldn't be!) or a snack mid-game - maybe some delish wasabe roasted green peas - drop in to the Angry Almond at Subi Markets:

http://www.angryalmond.com
Posted by Cookster at 11:40 pm

Yay Dockers! I'm not overly footy mad but I do appreciate how they slaughtered the Eagles in the derby. I went to Curtin, too. Remember Grok?

Do I remember Grok? I wrote for Grok back in the mid-80s - thought I was the next Hunter S even!

Hey, you never went to a party in Leonard Street Vic Park at that time did you - it was the ESA party and I reckon there were 400 people there. 'Die Monster Die' played a set on the back porch!

Cookster, thanks for the link and your kind words. You can also count on my link to you - I'll send you a little congratulatory e-mail/comment when we WIN BIG tomorrow.