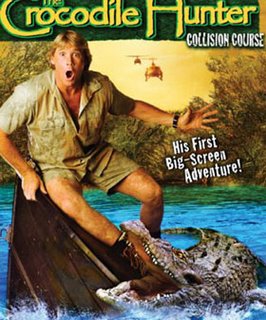 There's been a mini shockwave travel through the office... the king of 'Crikey', the man lambasted for dangling his baby over the jaws of a rabid croc, the man who was second only to Hoges in upping the Aussie "struth!" factor - Steve Irwin - is dead.

It's a sad day - I feel terrible for the family that he onviously loved so dearly (despite the croc dangling incident), but if he was going to bite the big one, well, a stingray barb to the heart is pretty fitting way to do it.

His gravestone would have to read: 'By crikey this bloke loved life and fair dinkum, didn't he have a good one...'

BREAKING NEWS: Steve "The Crocodile Hunter" Irwin is reportedly dead after being stung by a sting-ray during the filming of a new TV series.

The Courier Mail has reported the 43-year-old had a heart seizure after a sting-ray barb went through his chest off the Low Islands in North Queensland, near Port Douglas.

Irwin has been transported to Cairns Hospital.
Posted by Cookster at 1:00 pm