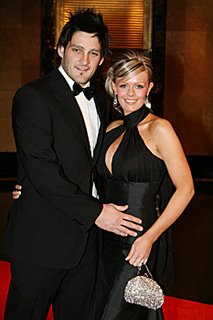 Ladies and gentlemen, the 3-2-1 for Biggest Brownlow Goose - displaying juvenile and drunken antics before a national TV audience - and the winners are:

3rd place: Brendan Fevola - half cut before round 1, wild gesticulations and an obvious inability to focus by round 6. One-eyed by round 12.

2nd place: Brendon Lade - looked almost studious in glasses until round 4, then polled quickly with his 'beer coaster on the schnozz' routine. You can take the bogan out of Port Adelaide...

And the winner is!

1st place: Travis Johnstone - was in high spirits from the outset, polling strongly with ill-advised and unwanted kisses to the cheeks of his team mates. Secured top spot with a lick to the face of a teammate in the dying rounds. Rumours involving a male nipple have yet to be confirmed.

Honorary mention: Daniel Kerr - for tearing up when he suddenly realised he was in the hunt... But he wasn't - GOLD!

Also, what the hell was going on with Judd's hair? He'll have to use that lip-bush as a comb over if he loses any more on top.

Well done to Adam Goodes and commiserations to Scotty West who has had legitimate claims on the Brownlow for years now - I'm sure he'll give it a run again next year, but he'll have to hold off a rampaging Pavlich.
Posted by Cookster at 11:35 pm

You guys in the West are so...um...so insular. You Freo supporters need to embrace the Force of the West (The WCE's)they are your countrymen. Get behind them. Lend them your support and cheer them on to the flag they so richly deserve. Move on Freo, you are no longer in the race, but your brothers are. You must defeat the synthethic swans. Sydney must learn the pain of years without success, and don't talk to me about South Melb...it's not the same team/club.
My prediction is that Sydney will win another flag, they won the Brownlow, what else can they win??

Another cup of raspberry cordial Swans supporters???? Drink up.

No 1 would have to go to Pavlich for thinking he actually had a chance!!!

I look good in the picture. Dont you reckon?

Brendo, we were just talking about you today and how you must chuckle every time you see Pup and Binga out together - 'Been there, done that!'

Nothing wrong with the misses - Kick her over here.

Which one has Fev done - pup or Binga? Or both?