Bedroom Secrets of the Master Chefs 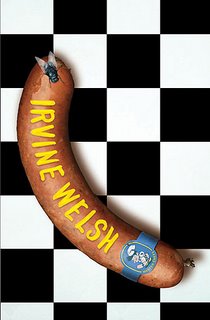 Aye laddie, that wee buftie Irvine Welsh is up to his usual tricks once again, dragging us along a cold and blustery Leith Walk by the scruff of the neck and promising lewdness, drink, drugs, sexual excess, football violence and... romance?

Yes, the dark prince of Scotland is back with his latest novel, the Bedroom Secrets of the Master Chefs and a new anti-hero in the likes of hedonistic party boy Danny Skinner - a council restaurant inspector who likes a wee bevvie or 10, plus a bit of the "white powder... just to give me the edge".

When the two cross paths in the workplace a chain of events is set in motion, born from Skinner's fierce, almost supernatural hatred of his young nemesis. The resulting plot twist gives flight to Welsh's glorious ability to capture and deliver tales of hedonistic debauchery so wrong that they fairly reek of old fag ends, stale sex and endless pints of lager.

Add to this Skinner's sad search for the father he never knew - he told the kids in school that it was Joe Strummer - and a salubrious slice of seedy Edinburgh kitchen life... Welsh at his realist best.

But it's when Skinner's transposed to the West Coast of the US that the reader is really treated to the comedic genius of Welsh's complex characters and the keen observations that only they can make.

Aye, it's not for the feint hearted or the "dinguls" of this world, but for those of us who ken what this gadge is on aboot, it's a f*****in good laff!
Posted by Cookster at 9:47 pm

Irvine Welsh
"I've got this friend who's been a junkie for 25 years. He said to me when Trainspotting came out, 'Why have you written this book? You've only been a junkie for five minutes.' " Welsh's eyes dim for a moment. "Well actually, it was 18 months." He seems keen to go on. "It was a stupidity and a weakness. I've not touched it for years, but it's in your vocabulary. If something bad happens in your life, it's always there in the background, waiting for you to trip up." Welsh kept a diary when he was on heroin; sometimes the odd note, sometimes whole therapeutic pages about addiction. Trainspotting in embryo.

The junkie in Trocchi and Burroughs's fiction was by and large a culturally middle-class figure - a member of the intelligentsia, a rebel who saw society as not having done anything for them, so they're into this drug that's their own, a symbol of their rebellion. There's always been that sort of bohemian type drug sub-culture. But in Edinburgh, in the eighties you're talking about people who wouldn't normally be involved in the heroin scene, people who didn't have that Trocchi-esque attitude of setting themselves up in opposition to society. It was just people who really didn't have a fucking clue as to what was going on... I'm not writing a text-book on drugs or drug legislation . . . I wouldn't be comfortable becoming a spokesperson for anything; drugs spokesperson, underclass spokesperson. I don't think you can write anything definitive if you do. It's only your truth as you see it

Welsh looks thoughtful and pauses for a full 15 seconds. "I can't really say I've had a great deal of personal problems with drugs," he says eventually. "The problems were caused by the procurement rather than the effects. In your teens and your twenties you're not really aware of your mortality, you're just steaming in... There's a tension when you write a book like this [Trainspotting], that people expect you to be either this big reformed ex-junkie voice-of-experience, which I don't think I am, or they think you are some kind of middle class voyeur looking in and writing an exploitation book about other people's misery, which equally I don't think I am. Probably you could point to people in my past and they'd say: 'Oh, he was never into anything like that to that extent.' Or get people saying: 'That bastard was much worse than any of the characters in the book.' "

Look up Irvine Welsh on Google:

I'm not as dumb as you think I am, I've learned a thing or two. I don't care about nothing at all, but I think the world of you.