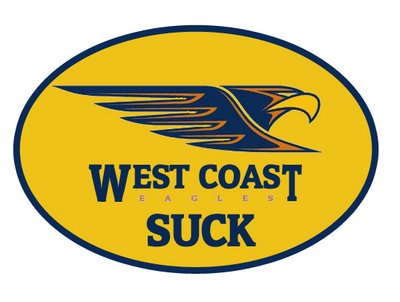 Now, the main focus of all Fremantle supporters right now is obviously knocking over the Dees and securing Sandi an aisle seat on a jumbo heading for Siderknee a week later.

But, in true Docker spirit, the team at www.dockerland.com couldn't resist making the most of an opportunity to well and truly stick it to our cross-town, chardy sipping neighbours - the West Coast Eagles, *retch!*.

So, while we're enjoying the game on Friday night, all Dockers supporters are being encouraged to download and print off the above sticker - link below - and stick it on the seat in front of them.

The train of thought is that many of the stickers will survive until the next day, when the seats will be occupied by the blue and yellow Wet Toast brigade - imagine the fury, the spilt plonk, the clash of furious knitting needles... priceless!!!

"This picture is intended for your own personal use and Dockerland does not encouraging vandalism etc".
Posted by Cookster at 11:50 pm

Well deserved win for your guys last night! Woohoo! Now if they can knock off Sydney, and we can knock off the old Eages (presuming they win today) then we will have an awesome competitor for the Grand Final!

Thanks Kales - I hope the Doggies pluck the Eagles bare! Be a cracker of a GF for sure.

Hey, here is my Eagles jersey - from a Swans fan.

Good stuff Cameron! Ahhhh, hating can bring so much pleasure!!!