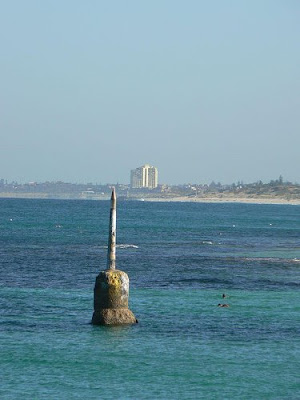 I thought that since 80% of the traffic coming to this site was linked to Google searches for 'Perth shark sightings', it would be remiss of me not to add to the discussion.

What a lot of people don't know - and I probably shouldn't be divulging this sort of information online - is that we've seen an increasing number of large sharks off Perth beaches this summer for one simple reason - the Cottesloe pylon and its dramatic lean.

Yup, that leaning tower of cancer ridden concrete that sits in the middle of the Cottesloe Beach bay plays a far greater role in shark protection than anyone, particularly government, cares to admit.

You won't read about it in the history books, but that pylon actually contains some of the most radical technology to come out of Soviet Russia during World War II.

A chap by the name of Vladmir Solsvensky bought this particular technology with him when he landed on our shores in 1935. The device, about the size of a football with a long tubular antenae, was designed to cripple the radar systems of German U-Boats when they strayed within 5km. More importantly it jammed weapons systems, rendering submarines useless, and had an in-built power generation unit that ran on sea water... the technical details I can't explain.

And so Vladmir just happened to raise this technology with a local councillor from the Cottesloe region over a few Swan Lagers one evening and the rest, as they say, is history.

The councillor had the device installed into one of a number of pylons installed in 1936 that were supposed to be anchor points for a vast shark net in the bay. Of course, the central pylon containing the anti-sub device was the most highly fortified and the only structure to remain after a storm swept in and knocked all the others down.

This is where it gets really interesting...

While there were no submarines to repel, over the course of the next 12 months the local authorities and surf lifesaving patrols noted a distinct drop-off in the number of shark sitings off the coast of Perth, at Cottesloe and Swanbourne in particular.

Vladmir insisted that it was his device that was now working to scramble the sharks' radars and detering them from venturing too close to shore. Alas, the Russian died in 1938 and knowledge of his device went with him to his grave.

Only the original councillor now knew what was really in that pylon, but he dare not speak for fear of retribution at having installed the device in the first place.

Over the next 70 years the effects of weather, vandalism and human modification have seen the effectiveness of the anti-shark device slowly wane. In recent years, as the pylon took on its distinct lean, the signals have almost disappeared.

This summer alone we've had shark sitings on a daily basis, many of these creatures well over four metres in length.

To be honest, I don't know if the sharks really pose a threat to humans, but I reckon old Vladmir's invention has probably saved at least a few swimmers from a close encounter of the very worst kind.
Posted by Cookster at 11:18 am

I reckon Cracka Hourn must be back in town and you've been blowing a few hot ones and coming up with stoner stories.

Clearly the moral of the story is: don't go swimming at Cottesloe Beach - be you human, or U-boat.

A pretty elaborate long winded tale if it is... im going with it. But the fact is that unless you wanna cut your hand off and jump on one's head from the RAC chopper they wont attack you. Sightings everyday, just two nights ago at dusk i saw what looked like a tiger shark at city beach. Last year on the gold coast there were 703 sightings over summer, 2 attacks, 0 deaths and the majority of sharks there are white pointers and bull sharks(highly aggressive) due to the tropical water temperatures. In all probability these sharks have been cruisin' round for months maybe years in these waters noone has been attacked i think its safe to say provided no one provokes them(boats etc) they should be fine.
Also statistics show that if you are more than 30 metres from the shore that you can almost guarantee there is a shark within 150 metres of you.