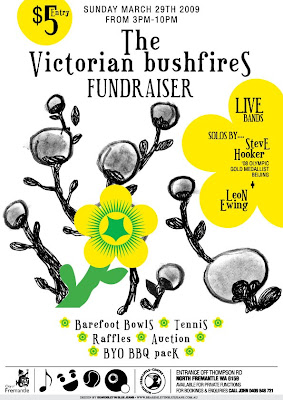 Okay, so holding a fundraiser on a long weekend didn't work so well... but, let's just call it a dress rehearsal for an even BIGGER, BETTER, Victorian Bushfire Fundraising Extravaganza at the North Fremantle Centre on Sunday, 29 March.

Not only can you slip the hush puppies off and have a lazy roll on the green, there will also be grass court tennis, a barbecue and four live bands. Yes, FOUR live bands, and we're talking some serious talent here... there might even be a 'Pirate' band, but watch this space for details.

And that's not all! You've seen Olympic Champion Steve Hooker fling himself really high into the air on the end of a large pole, now you can hear him SINGING. Yes, Steve will take to the stage, along with the legendary Leon Ewing.

Punters can even join the bidding war to get their hands on Steve's signed pole... one that he broke in training, *ouch!*

The show runs from 3 - 10pm and your $5 entry fee will go towards helping Victorian bushfire victims to rebuild their lives.

If you need more information, or want to help out with further auction items, call Cookster Senior on 0409 848 721 or leave me a message right here.
Posted by Cookster at 1:57 pm