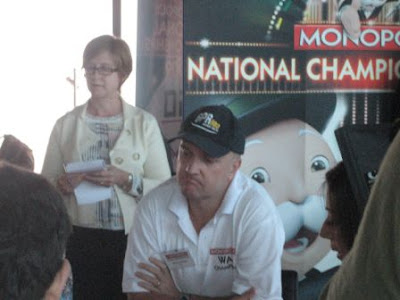 A note from the man who had all Western Australia's hopes riding on his tiny silver thimble... or racing car... maybe the horse?

He had Lillee in his side, but alas, when the pressure was on he did a Kim Hughes... albeit minus the golden curls. In the plane on the way home from the Australian Nationals in Melbourne, he attempted to do a Marshy and empty the plane of tinnies, but again, he was a six pack short of a carton.

Many of you I know are already aware of my fate at the Australian National Monopoly Championships (the Nationals) last week in Melbourne. But for the rest of you here is what may prove to be the final word on Monopoly, or so you hope.

To paraphrase the great boxing commentator whose name escapes me: “there will be no trip to Vegas for this West Australian bounty hunter”

Like all WA sporting teams of late – be they Dockers, Eagles, Warriors or Wildcats – I went down in a screaming heap. I lost, I choked, I took a hammering in the ring bit, I, well, all of the above.

It probably didn’t help that Dennis Lillee declared that I was the best WA Monopoly champion he had ever seen and he was confident I would bring home the bacon. Thanks DK!

As the 15 minutes of fame clock clicks over to the 14 min 58 second mark, I just want to take time out to thank all of you who offered me your support, wisdom, advice, your anecdotal stories about the world’s most popular board game and generally took the p*ss out of me. Your interest was much appreciated.

A big thanks to everyone who sent me monopoly themed text message after I was eliminated along the lines of going to jail, going directly to jail, not passing go and not collecting $200.

The first message was funny, the second amusing, the third mmmm, the fourth stick to your day job and by the 12th, hey I’m in Melbourne enjoying a free holiday and you’re stuck at work.

As I cling to my last seconds of fame, I will point out that I am the reigning WA State Monopoly champion until 2013 and have more in common with Steve Hooker - who also holds his Olympic title for four years – than anyone else on this email list, possibly with the exception of Mick Collis. (Sorry I let you down Mick, I bet you didn’t know, you’re still my hero!).

Was it hearing about how one state champion quit his job to become a property developer on the strength of winning the Australian title 10 years earlier only to go bankrupt five years later – quite possibly. What killed him? Maybe the realisation that hotels could not be built for $200, or going to jail was not a necessarily a good tactic in real life.

I feel I represented my state, my beloved Western Australia, with the necessary pride, dignity and honour. I was the last to leave the pre-tournament dinner. I was only one of two competitors who decided that going for a punt at the casino and slurping cocktails into the wee small hours was a good idea the night before the tournament (Note: neither of us won).

The 2009 Nationals were always going to be my swan song in the world of competitive Monopoly but I can’t help but feel after the ecstasy I felt in surging to the state title (and crushing all those kiddies) and the subsequent agony in falling from grace at the Nationals, that there is unfinished business.

I know how General George Patton, Rocky Balboa, Timmy Watson et al felt as they stood in the hall of mirrors contemplating their future. It is a combination of unfinished business and not wanting to retire on a personal low.

I want to experience what Alexander the Great felt (and I don’t mean the Oliver Stone inspired homo-erotic portrayal of the undefeated Macedon military leader). To paraphrase Plutarch (or Hans Gruber) “When Alexander surveyed the breadth of his (Monopoly) domain, he wept for there were no more worlds to conquer”. (Benefits of a classical education!!).