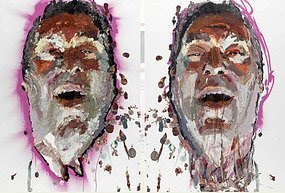 There's always going to be controversy about the merits of an abstract rendering of Oz-rocker Jimmy Barnes, particularly when it's been made by squashing one canvas on top of another to capture the former booze hound "off his head".

But that's exactly what Sydney artist, and lover of vintage Toranas and budgies, Ben Quilty did to take out the very tidy $150,000 Doug Moran National Portrait Prize yesterday.

Titled 'There But For The Grace of God I No. 2', it's a typically lavish piece of art that brings to mind the sort of tradesman-like quality - think mortar and trowel - that won Quilty the Metro 5 Art Award for young artists in 2004.

Don't get me wrong, Quilty is no cashed-up bogan slapping paint around without a purpose. His work boasts strength, plenty of rich primary colours and a texture that makes you want to reach out and touch. It's devil may care sort of stuff and not for your average punter who thinks that art is all about picture-postcard realism.

Back in 2004 when I was working for Metro 5 Gallery in a PR capacity, one of the paintings shortlisted for the Gallery's annual award really caught my eye -'Elwood Torana No. 7'.

It was a thickly layered rendering of Quilty's much adored 1972 LJ Torana that I believe he still owns. I loved the painting and in a begrudging, as only he can do kinda way, our chief judge Jeff Kennett thought the same.

Of course the painting went on to take out the then $30,000 Judge's Prize, with Daniel Truscott - a self taught painter who was working as a cook in the Maori Chief Hotel in South Melbourne - winning the $10,000 People's Choice Award. Another good decision.

It was quite the day. We announced the award winner to media in the morning and then I bundled the boys into the Mazda 121 Metro (not quite a Torana, but it is white AND I still own it) and we headed off to do the rounds of Melbourne radio.

The public launch was later that night and while I slinked off into the Armadale night after a couple of chardys to prepare for more media frenzy staring at 6.00am the next day, Quilty and Co went out to put a dint in his $30,000 cheque.

As I cruised across the Westgate Bridge at 4.45am the next morning feeling less than spectacular, a young Sydney artist was ruing the fact that he'd bothered to go to bed at all that morning. Indeed, Ben Quilty was feeling not so much seedy, but more like the proverbial pig had "shat in his head" aka Withnail & I.

I pulled up outside his Spencer Street digs and Quilty bundled himself into the car, cursing the first lick of light rising over Port Phillip Bay. "We decided to have one cocktail of every colour," I can recall him telling me, the hint of tequlia rich in the close cabin. "I might be sick, I should never have gone to bed".

Winding the windows down we cruised the empty city streets, headed up St Kilda Rd and took a very slow and careful left into High Street to make our date with Steve Leibman, Tracey Grimshaw and the Today Show team... a live cross from the gallery, beamed across Australia.

When we arrived, Ben took solace in coffee, while I performed the ritual I'd done a number of times in the past - guarding a single car parking space out the back of the Gallery for the Channel 9 outside broadcast van to park. It was the only spot where they could get a signal and it was my job to stop wave after wave of Toorak's elite yummy mummies from stealing the show.

With the van safely in place I headed inside the catch up with the second star of the show Jeff Kennett, who was quietly chuckling as Quilty bemoaned his $30,000 hangover.

Of course it all went swimmingly. Jeff cracked jokes over the headphones with Tracy, Quilty was the rakish young artist looking stylishly bedraggled and I looked on thanking some higher power that another Art Award had almost run its course.

Well done Ben and to all the other Metro 5 (now the Metro Gallery) artists I worked with who have gone on to do great things over the past eight years: Daniel Truscott, Marcus Wills, Yvette Coppersmith, Michael Zavros, Zhong Chen, Jason Benjamin and Emma Langridge (among others).

Can't wait to see what the cashed-up bogans make of the Barnsy picture!
Posted by Cookster at 8:10 am