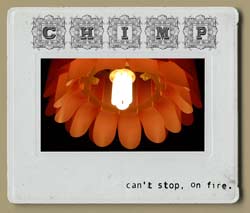 As Molly is want to say, do yourself a favour and buy this album by Chimp - or at least listen to it at cdbaby.com.

Lead guitar Jon Stewart is a former housemate of mine from the late 80s, when we were living in the 'on the edge of gentrification' suburb of Islington, N1. Jon went on to form the Brit-Pop band Sleeper with fellow housemate Louise Wener. He now teaches music in Brighton and Lou writes books.

My claim to fame here is that Jon credits me with helping get the band up and running after introducing him to the music of The Pixies, arguably the best band ever - in my books at least. A shame I wasn't around when Sleeper hit the big time - Jonny owed me a couple of drinks and I really would have enjoyed that rock 'n' roll excess.

Oh and Jon, I'll never forget the exploding 'doobie' you gave me on my birthday - damn thing nearly took an eye out!

Sublime, poignant and tinged with a distant threat of madness and longing...like sitting in a hot tub by yourself in the middle of a pine forest on the cusp of spring - wind in the branches - elements of warmth and chill that lull, caress and somehow invigorate - mulled wine and hot rum toddies.

Can't Stop, On Fire is an eloquent collection of well crafted tunes that hang together as much on their emotional pull as their musical charm.

It's an old car lost on a bush track in the red dusty outback carrying Alex Lloyd, Grant Lee Buffalo, Lou Reed and the ghost of Jeff and Tim Buckley... there's a bottle being passed around and an odd scraping sound coming from the roof that no one really cares to investigate...