Yacht racing on the Swan River 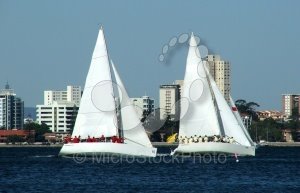 Corporate days out in Perth are always a treat - invariably involving drinking cold beer in the sun, eating copious amounts of shellfish and flinging about a few business cards... and a day out yesterday sailing on the mighty Swan River out of Royal Perth Yacht Club was no exception.

Of course, nothing like starting the afternoon with a few gourmet sangers, washed down with a couple of icy cold Coronas before jumping on board our Foundation 36 yacht under the helm of 'Skip', a veteran of the 1983 Australia II America's Cup win.

We headed out into the 25-30 knot breeze - a faint tinkle of Land Down Under running around inside my head - and I was unanimously chosen to steer the boat as opposed to being a 'winch wench'. Nice move I thought, until I realised that steering a yacht straight into a stiff breeze is akin to driving a Holden Berlina station wagon through mud with two flat tyres and a broken axle. But it was okay, Skip was on hand to take over when it looked like we might be sliced in two by one of our dozen or so race competitors, or tossed into the river to swim with the jellyfish.

The idea that sailing was all about sipping champagne and giving the odd tug on the jib while you watched someone else trim the main sail soon flew out the window (if we had one), along with half a dozen caps. The boat tilts up on such a steep angle that at one point I thought I'd soon be hanging vertically, clinging to the guide wire railing, with nothing but salty air and the river beneath me... it was like driving a car on two wheels.

Going back down wind it's much more civilised and battling it out to beat the opposition around the markers is quite a thrill when you aren't scrambling around on all fours on the deck trying to prevent yourself being garotted by wet ropes - at one stage I ticked when I should have tacked, but Skip took most of the pain out of the situation and I only ended up with a bruised winged keel for my error. However, one of our crew gashed his leg open and someone on another boat lost a toenail.

We took part in two races, finishing in second spot both times, which placed us in third position overall - a bronze medal if you like. Our team all won steel meshed reinforced garden hoses, complete with stainless steel fittings - next year I've got my eye on first place and a Ryobi Cordless Powerdrill...
Posted by Cookster at 8:21 am