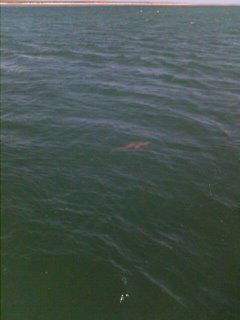 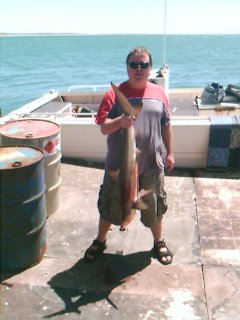 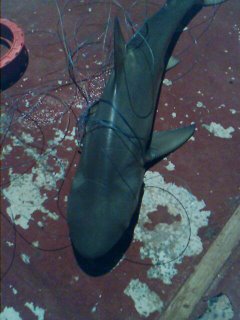 An amazing three days in the wilds of Shark Bay just wouldn't be complete without a bit of shark action would it?

We launched the boat mid morning Saturday in beautiful Monkey Mia - and yes, there were dolphins swimming around our feet as we got the boat ready! - and then set off on a choppy sea towards The Blue Lagoon Pearl Farm.

The wind really gets up in Shark Bay, so we'd decided on a tour of the pearl farm first and then a spot of leisurely fishing just offshore in the bay. The farm itself is an amazingly ramshackle structure anchored a few hundred metres offshore, with its own facilities and a state-of-the-art pearl shell breeding laboratory. It also provides a much better platform for fishing than dad's big tinnie, so out came the rods, reels and handlines, along with a bag of mullies and a bucket of squid for bait.

Five minutes after the first cast the outlines of two young bronze whalers came circling the platform looking for an easy feed. Three minutes later and Dad had hooked one up, alas it spit the hook and cruised away - three times!

I switched to a smaller line and caught a young parrot fish and as I pulled it in, old sharkie had a go at it, but missed. I pulled the parrot fish in, hooked it on to the big line and hurled it back into the bay. Sure enough, sharkie was interested and bang, it hit the line and took off.

For the next 10 minutes I fought it back towards the platform, amazed to see it leap out of the water a few times, give a couple of flips and crash back into the water. Finally we hauled it on deck and were about to go the catch-and-release method, but the silly bugger rolled itself up in fishing line and we weren't going near those snapping jaws to cut it loose.

I'll tell you what though, those fresh fillets soaked in milk, rolled in flour and pan fried in virgin olive oil with garlic and chili made the effort very worthwhile.

More Shark Bay pics and tales shortly...
Posted by Cookster at 7:38 am

Thought the photo was taken on your dads boat at first, bloody big tinny.

Don't surpose you did much swimming from the platform?

Mate, it was as hot as buggery up there, but I didn't even dangle my toes in the drink.

The pearl farmers were saying that they've seen plenty of big tigers up to 25 feet long and more than the occasional white pointer and hammerhead.

A few weeks ago Dad jumped in for a dive off the back of the boat and three minutes after he got back on board a big 18 foot tiger started circling the boat.

I tell you what, with all the huge pink and black snapper, dhu fish etc, etc, swimming about, that's where I'd go if I was a shark!

Forget the catch-and-release method you should have just lopped off the dorsal and thrown the 'silent gray fellow' back. Your scaly mates up in Seoul could have made a fair quid on it up at the Noryangjin Fish Market.

Did you have a few delicious' with John Senior?

Yes indeed Harf, I enjoyed one or two ice cold ales and a particularly delicious vodka with lime and soda over ice when I got back after the great shark hunt...

who would have guessed you become shark dundee?
I'm impressed! And Kai even more.