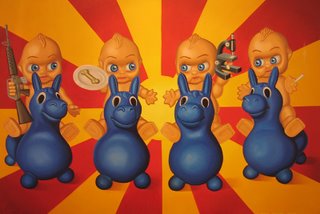 Thought I'd write a book based loosely on a Contiki Grand European Tour that I took in '84... at least I think it was '84... anyway, here's the first chapter.

When the raffish young hotel porter insisted that I smell his proffered index finger, I knew it wasn’t a good start to the jolly 18 – 35s adventure that I’d been promised.

It was a warm and (dare I say it) ‘sticky’ day in London and I’d just bussed in from Heathrow Airport to begin my very first overseas adventure. I felt like shit warmed up and the combination of a jetlag hangover and the porter’s stinky finger wasn’t making things any better.
Indeed, a swift kick in the nuts would have been a preferable option right at that moment.
“Go on, ‘ave a sniff,” he offered. “She was a right corker you know…”
“Thanks, but no thanks,” I responded, weaving to avoid the offending digit as it sailed past my left ear.
“I’ve got a room booked in the name of Cooke. It’s been made through Contiki?”
“Ah, yeah, ‘ere we go – John Cooke, Aussie lad – room 193, ninth floor,” he answered, handing over a key attached to a wooden block the size of a brick.
“Hey, before you disappear,” he whispered with a conspiratorial leer, “tell me is that dirty bugger ‘Arold still giving it to old Marge then?”

Ten minutes later and free of the finger I was in my dreary shared room, wondering which unmade bed was mine. I settled on the one with the least amount of pubic hair under the sheets, dumped my stuff and pondered what sort of axe murderer I was rooming with. As it turned out, my hirsuite roomy failed to materialise – no doubt shedding away in some other far flung corner of the hotel.

After a futile attempt to wash away the jet lag, I headed down to the Contiki Club Bar to meet the people I was about to spend the next 56 days with. The thought of my first pint in Blighty had lifted my mood somewhat… then I found myself sharing the lift with Mr Stinky Finger. Of course we stopped at every floor.

The Contiki bar was chockers when I arrived, with more thick Aussie accents bouncing off the walls than you could poke a stick at. I grabbed a pint of Carlsberg and wandered over to the designated meeting area, taking a seat and scanning my fellow tourists. Nothing immediately registered on the “possible shag” radar, but then again, I probably sailed in well under their radar too.

No, my arrival had hardly proven a conversation stopper for the assembled antipodeans, but it was still early days and I was only halfway through my first pint. Little did I know that there was a shrimp vindaloo with my name on it bubbling away in a Tottenham Court Road eatery at that very moment...

Image: Four Riders of the Apocalypse, Daniel Truscott, 2005
Posted by Cookster at 8:33 am

Alright there geezer? Was that hotel the Royal National in Russell Square?

I tossed a good sort up in the air there one boozy nite back in 1990. She was a Kiwi and hornier than a cane toad - I ended up catching a right old dose of chlamydia off her.

Well worth it though!!!

The one and only Royal, but please note that all references to unmade beds containing copious amounts of pubic hair are purely fictitional and designed for the amusement of readers only!