Aussie action at the World Cup 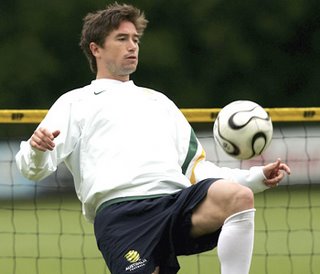 Well, it's almost time for the FIFA World Cup to quite literally kick-off and how good is it that the Socceroos have qualified and will finally be taking part in the action on a world stage. Christ knows they've done their best to stop us in the past and succeeded.

I keep expecting some Euro Aussie-phobe to suddenly realise that they've let Australia slip through the net and change the rules again to knock us out at the last minute - 'I'm sorry, but we think it only fair that you play a team made up of the world's best players in order to qualify... can't have you getting in that easily now, wouldn't be fair on teams like the USA, Togo or Poland...'

Bitter? Just a bit - just doesn't seem quite sporting that despite belting the living suitcases out of every team in our region, we've never had the opportunity to rip off a few 'Aussie, Aussie, Aussie, Oy! Oy! Oys!' for our boys, yet in some parts of the world you can qualify by simply being able to recognise that yes, soccer balls are round.

There was a great little Italian restaurant around the corner, tucked in a laneway off Upper Street and served the best seafood pizzas - but it was the same deal there. TVs were everywhere and if Italy looked like scoring, it was forks down and be prepared to wait. If Italy actually scored, then it was time to knock back a few chiantis very quickly, join in the celebrations and hunker down for a very long night.

Just for a bit of added 'cool' factor, England's theme song for that campaign was penned by none other than New Order - 'We're playing for England, Eng-er-land!' Still sends a shiver up my spine today. Let the action begin!
Posted by Cookster at 8:14 pm