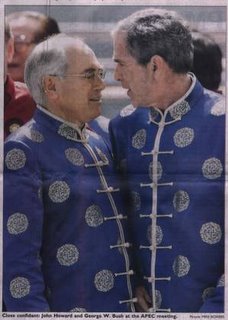 I almost choked on my rice bubbles this morning when I heard a news grab from the Howard-Bush 'Love Fest' in which Dubbya describes our Johnny as "not the prettiest" guy on the block.

Of course, our Johnny being the brown noser he is, failed to retort with a well timed, "That's okay George, cause you're not exactly the smartest bloke on the planet - about as sharp as a bowling ball in fact..."

Dubbya even went on to comment about the PM's bald pate, in a move which I think was intended to show just what great mates they really are - I think it was a scene stolen from 'Dumb and Dumber', or in this case, 'Dangerous and Dangerouser'.

So chummy are these two that word from Canberra is that Johnny generally greets Mr President with the truly Aussie opener, "G'day you old bastard, how the bloody hell are they hangin'?" Dubbya just loves it and intends to come up with the perfect rejoinder one day, just as soon as one of his staffers makes one up.

Talk around town is that the two men are planning to retire 'Brokeback Style' and set up house on a large ranch property in North Dakota. There they can spend aimless days polishing their saddles and telling war stories across an open fire.

John Howard and George Bush - what a couple of wacky funsters they are!

Is that actually Dubbya's Finger, or is Johnny just happy to see him?