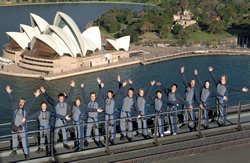 I've been a lazy poster over the past few weeks, but with the days getting shorter, the nights getting colder and the demands of the office growing ever greater, it's a bit bloody hard - flat out like a lizard drinking, as the old saying goes.

But I got worried today when a blog browser typed in 'scotum verandah (yes, spelling mistake intended' and got directed to my site - numero uno, first cab off the 'scotum' rank. Indeed, one of my posts did indeed mention the mis-spelled version of scrotum and verandah. However, I don't think my post provided the information this browser was after... methinks the terminology may indeed be the same as, 'the verandah over the toolshed', i.e, the male beer gut.

Anyway, moving away from scrotal matters, I can highly recommend that when next in Sydney you do the Sydney Harbour Bridge Climb - see photo above.

I did it as part of a corporate team building exercise a few weeks back and it's quite a day out. For those of you scared of heights, there is one section where you climb up steel ladders - 75 steps in total - through the traffic and that gave me a bit of a moment. But once you're up on the arch it's quite peaceful taking in all the Sydney smog as you gaze down over the Opera House and other Harbour attractions.

One of the bridge facts that sent a shiver up my spine was how the thousands of rivets were hammered into the bridge - including the narrow support beams that run across the middle. Apparently one guy would haul the red hot rivets up from below and then throw them to the bloke out in the middle who would catch them in a little bucket before putting them in. And if you wore a rope to secure yourself to the bridge you were considered somewhat of a nancy boy. Surprisingly I think only two blokes fell off the bridge, but I guess it explains why there are so many rivets at the bottom of the harbour.

Quite frankly, I'd rather chew off my own 'scotum' than scramble around on a slippery steel bridge trying to catch red hot lumps of metal in a bucket for 10 hours a day. But those Sydney-siders will do anything for a crust...

One final word of caution, do not consume a lazy 10 C*%k-Sucking Cowboy shooters the night before the climb - I was sweating butterscotch schnapps by the half way point. They breathlise you before you start the climb and I think I only just scraped in.

Anyway, must be off to work on growing the verandah.
Posted by Cookster at 7:38 pm