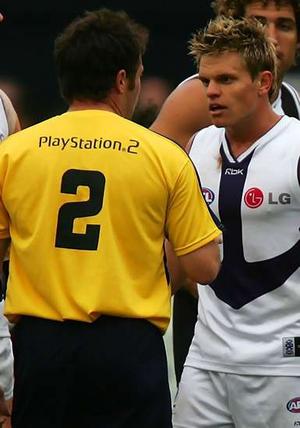 I almost had a brain snap yesterday, following one of the most ludicrous umpiring decisions that I've ever witnessed in AFL football.

And there have been a few involving the Fremantle Football Club: an umpire marking a kick from one of our players, an umpire asking the opposition team if they were happy with a decision and, well, the list goes on...

But yesterday at York Park in Launceston we witnessed the mother of all umpiring mistakes. Not content with abolishing the traditional centre bounce in favour of simply giving St Kilda a free kick out of the centre every time a goal was scored, umpire Nicholls decided to let the game continue after the siren to give the Saints every opportunity to win the game.

It would seem that the umpire's plans to hand the game to St Kilda via a series of ridiculous free kicks was thwarted by some good play by the Dockers and some indifferent form on the part of their opponents. Indeed, despite a veritable 'golden platter' being served up to the Saints, the umpire looked doomed to run out of time and opportunity to hand them an ill-deserved win.

Indeed, the siren sounded and Freo players immediately started celebrating a hard fought victory... but that's when it all got mondo bizarro and the weirdness level was cranked up to 11. You see, umpire Nicholls grabbed the ball and walked back to indicate that he was going to bounce the ball, despite half our players already walking off in search of a wet cloth to wipe away the spittle that had collected from being in the same suburb as 'no neck' Freaky Fraser for the past three hours.

While Freo players jumped up and down politely advising Mr Nicholls that it was all done and dusted, his eyes glazed over and the ball was indeed bounced. It went to a St Kilda player and a snap on goal resulted in a behind to level the match a full 10 seconds after the game had actually finished. But that's not all!!! Not content that St Kilda had simply levelled the match, our fave umpire awarded the St Kilda player a free kick and another shot on goal to try and rectify the situation - thank f#$@ that justice prevailed and it was another behind.

By this stage big Chris Connolly was stalking around the playing field like Gene Symmons on benzedrine and Cameron 'The Colonel' Schwabb looked like he was about to extract the missing two points directly from Nicholl's sphinctre.

It's fair to say that the siren at Launceston is akin to the sound of a mosquito farting in a paper bag, but the fact that everyone else heard it should mean that whatever happened after that moment should become null and void.

Too bad if the blood was rushing through Nicholls temples as he bullishly refused to concede a Fremantle victory - them's the rules. I urge one and all to go to the link below, sign the petition and help to overturn this travesty of justice.

What's going to happen, do you think? Freo have every right to challenge the result, but then if it does get changed, the TAB might take legal action as they've already paid out those who wagered on a drawn result.

In any case, it reminded me sharply of an SBS doco on the French soccer team--in particular their 1982 World Cup semi-final against Germany. One of the French guys was streaming into goal when the German goalie blatantly hip-and-shouldered him. Despite the French guy being stretchered off, the refs took no action whatsoever.

Arthur, apparently the bookies have paid out on a Freo win and a draw... nice to see them set the precedent for the AFL huh?

i nearly cried yesterday when i saw what had happened. in my mind the key is that the siren didn't keep sounding. i know that the rules state that the game is only over when the umpires hear the final siren and signal the finish but if the siren doesn't keep blowing in accordance with afl rules then how can they hear it?? they can't just take the word of the freo players and finish the game on their say-so. surely since the timekeeper broke afl rules the game should be retrospectively finished at the time of the final siren and awarded to freo.

thought you'd write something on this.. but as a sainter supporter i disagree.. although the umpire didnt here the sirens the game isnt over till the umpire says so to fair rules it doesnt matter.. the saints won fair and square..
emma williams
the_consultant_files

Emma, you're a good Yarraville girl, but as I've said to my other Saints supporting mates, 'the siren went - we won - time to give us back the two points'.

Imagine if this happened to Eddie???

Well, you got your two points.