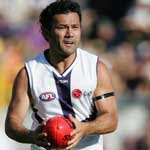 Thank Christ the cricket season's over and we can focus our attention on the AFL once again. Not that I don't like cricket no, I love it, but to be beaten by those bland, jandle wearing, sheep shagging Kiwis is the ultimate insult - especially on the back of a loss to the Poms.

I've met some very nice Kiwis in my time, but really, the vast majority of this mob have a huge 'chup' on their shoulders and seem to live their lives plotting the downfall of Australian civilization as we know it. Despite this fact, I'd happily swap PMs any day - our flacid little man Johnny for your butchy, man-talking Helen.

Look, I know it's all sour grapes, but what got me really ticked off about this cricket thing was hearing some halfwit nonce in the ABC radio box in Nu Zuland going off his tiny little head towards the end of the last game.

One of the Kiwis was run out, so Mr Impartial Commentator can be clearly heard shouting, 'Not out, thet ez not out!' Of course, he was out, so next thing you hear is a giant thump on the sound board and a resounding 'fuck!' Lovely language for our Aunty listeners.

At the end of the game we were treated with 'yee-ha' and 'you bloody beauty'. And not only that, the effects microphone was picking up some other 'bleck kep' tard in the stands shouting out, 'fuck off Aussies, you're the buggest losers'.

So, you can take your Craig MucMullens and shove him up a sheep's beckside.

Now it's time to focus on THE great game and the might and power of the purple clad Fremantle Dockers as they give the West Coast a right old plucking in the NAB Cup. If we lose, I'll blame it on the Kiwis.
Posted by Cookster at 11:45 pm

I know where you live Bro!

Watch out or I'll throw a toaster in your spa!