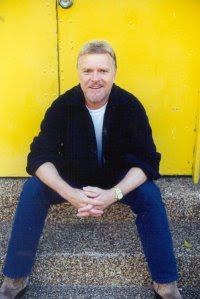 I was never a huge fan of Billy Thorpe until I read his two rollicking autobiographies 'Sex and Thugs and Rock 'n' Roll' and 'Most People I Know'. This man knew how to party with the best of them and his life was certainly well lived.

Such an enormous shame to see this huge talent, this massive personality simply taken away in an instant, but looking back on his past, I think Billy'd be the first to say that he'd ridden his luck like a wild stallion and sooner or later the ride was going to come to an end.
Take for instance the time that he overdosed on cocaine in New York and ended up dying on the operating table twice before being stabilised and sent to a ward in the infamous Bellevue Mental Hospital for the criminally insane.
He spent days lying opposite two Mexican psychopaths who he dubbed the Morpheeno Brothers due to their constant cries of 'morpheeno! morpheeno!' during their waking hours. Billy himself couldn't escape the needle, with his nurse 'Big Bertha' jabbing him up on a regular basis.
Another great story involved a road trip to the outback with The Aztecs where they played in a shearing shed that had to be mucked out before they could set up the equipment. In the middle of the set the power went off and dozens of red neck farm boys descended on the crowd and beat the living suitcase out of everyone, including the band. After all was said and done the good ol boys ambushed them again after the gig and chased them all the way back to the hotel, shooting at them as they went.
Lobby Lloyd missed being shot in the head by half an inch thanks to some very good luck.
And of course there was the time that Billy ingested a particularly potent tab of acid at the Sunbury Festival and walked right off the edge of what was a very high stage.
Yep, he rode his luck and made the most of his 60 years, even if at times he was a little hazy and most certainly quite crazy.