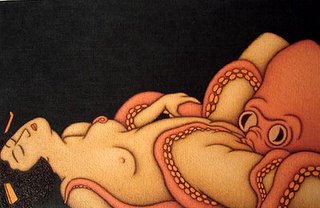 Good news on the Perth art front, with Freo-based painter Rachael Coad making the list of finalists vying for the 2006 Metro 5 Art Award valued at a whopping $50,000.

Yes indeedy, the winner of the Judges' Prize takes away $40,000, while the People's Choice category is worth a cool $10,000. It's worth more than The Archibald and it's only open to artists aged 35 and under.

In my four years doing PR for the gallery not one West Aussie cracked a finals guernsey, so it's great to see a Sandgroper finally in the running.

And even better news for Rachael's chances, one of the members on this year's judging panel is fomer Perth artist - made for the blade - Emma Langridge (you may have bought a book from her at Elizabeth's circa 2001).

The winner is announced in February, with paintings by the finalists on show very soon. Go Rach!

Metro 5 Gallery is located in High Street, Armadale, Melbourne and is quite seriously one of the best places to view quality contemporary Australian art anywhere in this country.

Be careful though when viewing the Laity images - the painting above - a rendition of a 19th-Century woodcut by the Japanese artist Hokusai - attracted bomb threats when displayed in the gallery's street window. But as we say, all publicity is good publicity and a woman having oral sex with an Occie is bound to attract some attention.

What an interesting blog, introduced by a thought-provoking photo. The unusual wall painting of the dwellings is
also a strangely modern interpretation. Something like this hieroglyphic view of a park by Swiss painter Paul Klee, http://EN.WahooArt.com/A55A04/w.nsf/OPRA/
BRUE-8LT475.

The image can be seen at wahooart.com who can supply you with a canvas print of it.