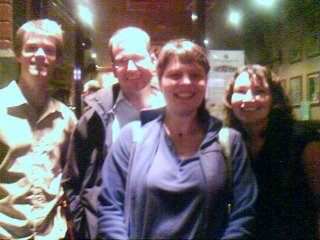 Well, this is certainly no prize winning photo, but at least it affords some element of anonimity to the subjects herein and I couldn't make a whistle-stop tour of Melbourne without posting something on the blog!

This pic featuring (L-R) Ben (a young Kevin Bacon), Edgar (blinding us with his high Kochie forehead), Martina and Jacqui, was taken after a rollicking good night at The Blarney Stone in Yarraville.

The suburb has changed somewhat since I made the move to the South African side of the Nullabor, most notably there are at least a dozen pairs of shoes strung over the wires across the main street - from high heels to sneakers. We think it's got something to do with the Yarraville Festival this weekend - they're an arty bunch that mob. Disappointed that I won't be there for the big fiesta, chowing down on my usual 200 Greek doughnuts. If anyone knows where I can get my hands on some of these tasty little morsels in Perth, let me know, I'll pay handsomely!

LK, Shelley and Jacinta - thanks for breakfast and good luck with those textiles. Sorry I couldn't help with ideas, but it was 5.00 am Perth time and I only had one latte under my belt by that stage...

hmm. funny.. the main thing i really remember is the donuts too.. those donuts were very oily we had like ten at a time!!!! but one of the best parts is the dog show.. that will get sum laughs.. yeah i live in yarraville. AND AM TRYING TO FIND OUT WHAT THE OUTDOOR MOVIE SCREENING WILL BE!!!
if u have any knowledge on this matter.. please!!! tell me at .. average_redhead@hotmail.com or blog me at goodgollymissjolly

yeah.. thats me mr treehugger .. couldnt think of anything else at the time..
grace

oh yeah.. i noticed that 2.. their used to be only one pair a couple of weeks ago.. the ugly yellow sneakers.. i think some people have got a bit over excited.. ah and the blarney stone pub.. the old bluestone.. i loved that pub as a kid havent been for years though.. dammit!!

Hi Grace - I hope the movie went well and I bet there was a reason for those shoes! The old bluestone, fyi, is no more. They knocked it down and built apartments there to attract people from the other side of the Westgate - very sad!

great!!! how come im always the last to know.. lve changed my adress to The_Consultant_Files or also known as MomentsofTranquility...
Grace