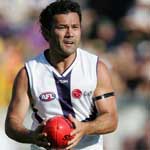 The headline says it all really, 'Dockers Hammer Eagles'... not 'Dockers Get Over the Line Against Gallant Eagles' or 'Dockers Snatch Unlikely Victory', they HAMMERED the Wet Toast!

Quite frankly, it was all over in the first term and with Elvis scoring a lazy half dozen and Jlo picking off three, it bodes well for the season ahead.

Jimmy Walker was running around like a 16 year old school boy, Medders has traded in the tree trunk thighs for an explosive set of pins, Sandy was monstering everything that came within 20 feet of him and the last I heard, young Peake is still running.

The defining moment: Judd grabs the ball in the centre, heads off for a trademark run, bounces the ball - bang! caught! - quick turnover, Dockers goal...

See you all next week at Subi where we'll teach Eddie's mob a football lesson.

http://ninemsn.sportal.com.au/default.aspx?s=afldisplay&id=78422
Posted by Cookster at 7:38 am

how truly wonderful.. let's just hope it's the second (after the london derby) in a long line of uniterrupted derby wins. we need to square the heath ledger a bit and give the yuppies something to think about (besides how to make their next million and where to source that lovely chardonnay recommended to them by Pierre Smith III)