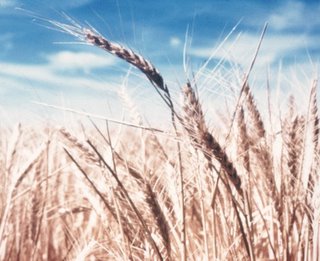 It's a funny old world, init? Over in the US old Dickie Cheney is popping his own side in the chest with pellet guns - must be a West Coast supporter trying to steal his parking space - and over here little Johnny is playing silly buggers with our national grain - the almighty wheat kernel.

Word is that Johnny is meeting with the Australian Wheat Board (AWB), which is up to its neck in the Saddam Hussein 'money for grain' scandal, to ask if it's okay for other wheat suppliers to start selling to Iraq.

My take on what the conversation will be is something like this:

JH: "Ahhh, now, ahhhh do youse blokes reckon we could take a bit of pressure off us blokes by letting someone else take a slice of the highly lucrative wheat pie that you've monopolised and lined your own pockets with for years?"

AWB: "Ahhh, no I don't think so Johnny and just remember, a few of youse blokes have had your own thumbs stuck squarely in this pie and you wouldn't want that getting out now, ayyy?"

JH: "Ahhhh, oor, ahhhh, no you're dead right there mate - old Vailey's sweating bullets already. Look, the general public don't give a rat's about this whole thing anyway, so I'll just chuck something overboard to divert their attention and rev up the old 'Beazley's got no ticker' line - they love that one, hurgh, hurgh (Johnny chuckling)."

In the meantime, Saddam Hussein is on trial in a pair of dirty long johns... funny old world, init?
Posted by Cookster at 8:22 am