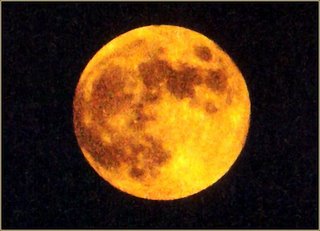 Last night we watched the full moon rise over the Swan River from the shore line at Matilda Bay. It had been a typically hot Perth summers day and the yellow glow of the moon seemed to suck the heat from the air just as the first licks of sea breeze started drifting in.

Just to complete the scene in an oh-that's-so-Perth way, a dolphin bobbed up in the reflected moonlight, carving long, graceful swathes across the surface.

All this took place to the soundtrack of tennis ball on willow, the 'plock' of champagne corks being popped and the sizzle of meat cooking on the communal 'barbies'. The whole subculture of communal barbecue codes of behaviour is worth a post on its own - stay tuned.

Despite the number one son copping a tennis ball in the eye during a fiery game of totem tennis with Uncle Jason, it was one of those lovely days that reinforces the decision to move back to Perth.
Posted by Cookster at 10:14 am