Not the bloody Western Force! 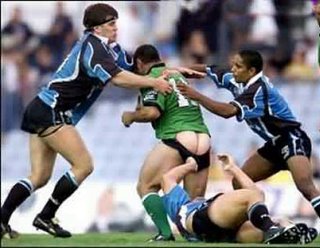 Well, time to head off home, load the double barrel shotty and take guard on the front porch.

Tonight is the first game for Perth's very own Super-14s rugby team, the Western Force, and I'm expecting parking mayhem to erupt as rum-fuelled, no-neck rugger types seek out prime spots to park their people movers.

It's great to see another team in WA, it's just a shame that it has to be a rugby team... seriously, this game is about as entertaining as a train crash.

Big blokes running into each other, lobbing the ball backwards and then gathering in tight circles to peer up each other's sweaty shorts - what's the WOW factor in that.

No wonder the local bottle shop runs out of Bundy pre-match - everyone's gets pissed up to the eyeballs in order to enjoy themselves. And what's with the Bundy??? Are there really 43,000 ex-pat Queenslanders now living in WA?

They call it God's game, but I reckon God is more likely to be decked out in purple, red, green and white and rooting for the fabulous Fremantle Dockers. AFL, now there's a game of real skill and excitement for you - none of this bloody scrum scullduggery.

I don't mind if they play their rugby up at Joondalup Stadium, or better still, Darwin, but Subiaco should be preserved for the real game.

Bring on Freo's first hit out against the Wet Toast next Sunday and should any of you yellow and blue scumbags try and park the Rangie on my front lawn, expect a few pelletts in the jacksey!
Posted by Cookster at 5:35 pm

"And what's with the Bundy??? Are there really 43,000 ex-pat Queenslanders now living in WA?"
I had to laugh out loud at that... Hello John, I found your blog via Antipixel so I just thought I'd say 'hi', being an ex-Perth (now Melbourne) girl and girlfriend of an extremely proud Docker's supporter. Go Freo!
I've never understood the 'throw it backwards! idea behind rugby. And the amount of boof on the oval during a game is just silly.

I'm with you Docker dude. I was followed by a group of Rugby supporting ass clowns as I walked up Hay St Subiaco on Friday night -my journey coinciding with their post-game buffoonery.

These hopeless drunks were chanting bawdy rugby ballads and I quote:

"The Mayor of Bayswater,
He has a lovely daughter,
And the hairs on her dicky-di-doe,
Hang down to her knees"

Can somebody please explain this to me?

Ahhhh, kindred spirits! Intint, no doubt we would have come across each other at Melbourne Dockers' games, me having attended most games over the past decade - I was back in Melbourne last week and after the punishing summer you just had, I got two days of rain!!! Isn't Antipixel a great blog for linking ex-pat Perthites together? Hopefully The Perth Files will do likewise, but I'll never be as polished as young Jeremy - and to think he used to be a hippy!

Rugy dirty ditties - jeeze, I remember listening to my dad's records on the sly back when I was a youngster. They were popular party tunes back in the 70s - I wish rugby had died the same sudden death! ;-)

Hey there, I was just browsing around..abit of idle time to lose..anyhow, found meself here. Anyhow, I'm a relatively new Perth boy and having been here 4 years have no desire to "going back".

Took abit to the Dockers and they will always be my sentimetal AFL team but thats where my interest with the AFL ends. On that note, I must confess I'm one of those "no-neck", "rugby supporting ass clowns" and by George, thank God for bringing the game they play in Heaven to Perth.

Rugby's not here to compete with your aerial ping-pong, in fact we are quite happy to play second fiddle to the no. 1 sport in the state. Furthermore, I can assure you that we take no pleasure or satisfaction in watching the game at Subi and will quietly move out once we have some other suitable venue that can accommodate our modest 22000 membership.

I'll simply finish off with a quiet "Go The Force!".