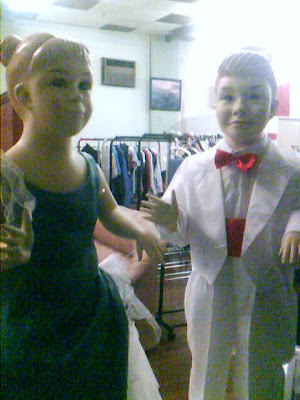 It happened on Sunday morning. The world as we knew it was gone and a dark pall had fallen over suburbia like a blanket over a bird cage.

I stumbled outside to find out where the sun had gone. Yes it was morning, but the harsh glare that would normally prise my lids asunder and prod the sleeping baby until he screamed for his bottle was curiously missing. It had shrunk away and was hiding in the shadows like a dog licking its wounds.

But I had been tricked before. The cunning beast which is the coming of day in Western Australia does not suffer fools gladly. It will tear the eyes from your very sockets and sear your flesh before you have time to mutter, 'where is the 30+?'

I donned my glasses and faux-quokka baseball cap, put the poodle on a leash and ventured into the street. Something was wrong. Very wrong.

Sensing danger I grabbed a five iron from the garage and wrapped the dog's leash tighter around my wrist. I was like Will Smith in that awful armageddon movie set in New York, except instead of an alsation and a pump action shotgun, I had a yappy poodle and a golf club.

The cause of my paranoia became evident immediately. It was pre-empted by a wailing sound, followed by large groups of people floundering about and clawing at their eyes, shouting, 'I can't see', 'Who turned out the lights?' 'Oh my Lord, why hast thou forsaken me?'

They appeared to be blinded, unable to see where they were going... staggering on hands and knees, or scuttling along crab-like, bouncing off trees, tripping on gutters. Joggers, dog walkers, retirees and empty nesters with nothing better to do. Individuals, some gathered in groups, others dragged by pets.

I grabbed a flannel-hatted senior by the collar of his cardigan and demanded he tell me what had caused this nightmare vision before me. 'Tell me old man or you shall feel the blunt end of my Ping!'

He cowered in fear, his eyeballs rolling back into his emaciated skull. His lips trembled. 'Don't you know? Don't you see what they have done? They have taken away our light... our shining beacon. Without it we are doomed. Doomed to wander the early morning streets as the daylight saving damned - wretched, sightless, aimless beasts.'

I threw him into the undergrowth in disgust. 'Get a grip man! The day is here - look around you... is this not light enough for you?'

But it was too late, he had stumbled into the path of oncoming traffic and disappeared in a puff of brown woollen fibres.

'You've had it too good for too long!' I screamed at them. 'You must adjust to the light and learn that you don't need to eat dinner at 5.00pm and be in bed before the final sirens sound on the closing credits of The Bill!

'There is life after Parkinson. It's okay to stay in bed until 6.00am! There is NOTHING to fear...'

But again, too late. Blind eyes and deaf ears. Rather than embrace the change they gathered in even tighter groups, huddled around radios sharing mobile phones to call talkback radio and wail down the line to Hutchison and Beaumont - whoever was willing to listen.

And in time the savagery began. Within days these rabid packs would begin wandering the early morning streets in search of the 'Savers', chanting 'Death to the Twilight' and offering up sacrafices to the 'God of Early Morning Walks'.

Meanwhile, on Rottnest Island, David 'Teh Outrage' Cohen was mobilising forces to take out these vast zombie hoards, but there was much planning to be done. He rolled his first herring spliff of the day, kicked off his deck shoes and leaned back to look out across Thompson Bay to the mainland beyond.

As the blue smoke curled languidly across the room to join the sea breeze snaking across the salt lakes, making music in the pines, he eyed the cream bun in the pantry and punched 1300-COOKSTER into the Nokia.

'Teh Rage here Cookster. The barge will meet you at the North Mole at 6.30pm once the zombies are safely in bed. You bring the golf clubs and I'll supply the octopus. Tell The Lazy Aussie to pick up Skink and Frank in The Worst of Perth Combi on the way - I have a plan.'

Nice dummy I must say, but there dress are very cute.

It had shrunk away and was hiding in the shadows like a dog licking its wounds.

Cute couple with nice dresses. Over all your post was so good to read.

The harsh glare that would normally prise my lids asunder and prod the sleeping baby until he screamed for his bottle was curiously missing.

That was hiding in the shadows like a dog licking its wounds.

It was really interesting to read the whole blog.

I saw a movie once about zombies and they didn't seem so scary, i think if i saw one in real life i'll go and say hi to him.

When I first read this post I was getting confused.But later on it gets clear to me.