Legends of golf return to Perth 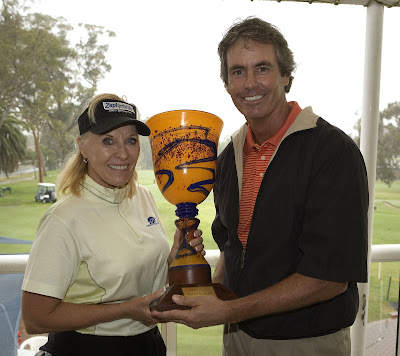 A release I prepared this week to announce the Handa Australia Cup golf tournament to be held this weekend 25 - 26 October at Nedlands Golf Club.

The launch event will be a corker - we're recreating the famous Jan Stephenson bathtub shot by putting talented young golfer Danielle Montgomery in a bath kindly supplied by Reece and topping it up with 1,100 golf balls.

If that aint worth a 30 second slot in the sports news, I don't know what is!

Legends of international golf, including Ian Baker-Finch, Jan Stephenson and Peter Senior, have gathered in Perth for the Handa Australia Cup at Nedlands Golf Club this weekend, Saturday 25 and Sunday 26 October 2008.

The Handa Australia Cup is the world’s only golf tournament to feature male and female golfing legends playing alongside the next generation of golfing stars, including the leading junior boy and girl from each state. It is also one of only two competitions where male and female golfers compete for the same trophy.

The competition was founded by Japanese businessman and philanthropist Haruhisa Handa, who is also the Honorary Patron of the International Blind Golf Association.

“The Handa Australia Cup is about joining the generations – bringing together rising stars and past champions in one unique tournament,” Dr Handa explained.

Now in its third year, the 36 hole event was preceded by a combined Pro Am on Friday, 24 October with the Australian Blind Golf Championship – Australian Open tournament from Wednesday 22 to Thursday 23 October.

The purse for the senior men and women professionals will be AU$100,000. This is the second largest senior purse in Australia, surpassed only by the Handa Open to be played the following week at Concord Golf Club in Sydney.

Spectators for the Handa Australia Cup are welcome and entry is free. For further information contact Event Manager Gemma Liddelow at Vault Sports Management: gemma.liddelow@vaultsm.com or (08) 9380 6978

What: Handa Australia Cup
Where: Nedlands Golf Club, Melvista Avenue, Nedlands
When: Saturday 25 and Sunday 26 October 2008 – daily tee off will commence at approximately 10.30am. The Pro-Am on Friday 24 October will have a shot gun start at 12.00pm.
Posted by Cookster at 5:01 pm