Wake up Geoff, Richie's mine! 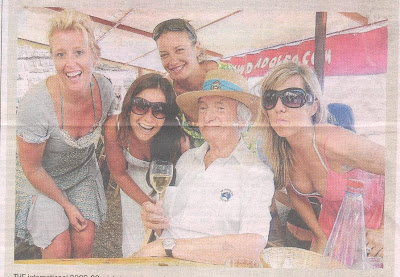 It's funny how teh interwebs seem to render time irrelevant, or so you'd think according to one of the latest additions to Geoff McClure's Sporting Life column in The AGE:

THE international 2008-09 cricket season may be just around the corner (22 days to go, in fact: just kidding), so what have the "stars" been up to in the lead-up? Well, in the case of Mr 22 himself, Channel Nine's veteran Richie Benaud, life hasn't been too bad at all. This snap of Richie was taken a few days ago in Positano, Italy, where the maestro was seen enjoying a glass of vino in the company of some of the locals' finest young ladies. Not sure of the reason for all the jubilation but maybe they knew of his coming celebrations. Yep. many happy returns to the ol' fella — he was 78 yesterday.

Now I've been a fan of Geoff's for many years, often scanning his column over the day's first coffee hit during a 10 year stint in Melbourne town. But he's taking a bit of 'license' in claiming the image above was taken "just a few days ago".

I actually received this photo via email from a mate in Perth on 24 July who had in turn received it from a friend - the person who took the photo - while on holiday in Europe.

Indeed, it was posted right here in The Perth Files on 30 July... Indeed, I flicked it across to my comedic buddy The Lazy Aussie who also posted it on The Worst of Perth.

But what the hell... it's a great pic and it fits too damn well with Richie's Birthday for me to concern myself with exact dates - what's eight weeks or so between friends? Hell, it may even extend Richie's longevity, which can only be a good thing, right?!

Geoff, if you read this, I'm the bloke who sent you the pic of Jess Sinclair looking like an extra from the set of Hair the Musical on the day he got drafted to Freo. Now that he's retired it might be time to give that one another outing?

Update: Good to see some loyal blogging support from Sunili at Because I Said So.
Posted by Cookster at 8:27 pm